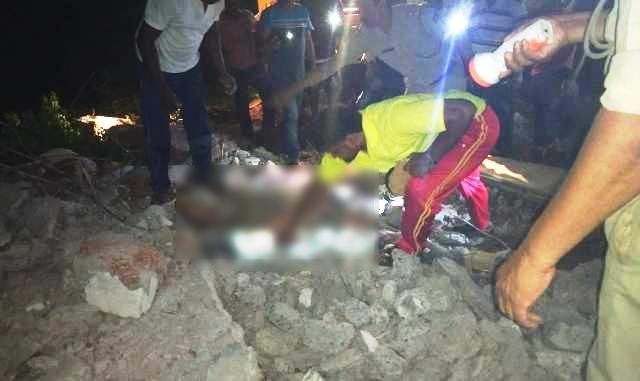 Cuttack: Two youths, who were cousins, were killed while another sustained critical injuries after a house collapsed following a bomb explosion at Ghodabara village under Banki police limits in Cuttack district last evening.

The deceased have been identified as Pabitra Nayak (32) and Manas Nayak (27). Injured Paramananda has been admitted to the SCB Medical College and Hospital here and his condition is stated to be critical.

Sources said around 10-12 youths were playing cards in the house at around 7 PM yesterday, when some unidentified miscreants came and hurled bombs at the house. The intensity of the explosion was so high that the house got completely destroyed. While some youths managed to come out, the three youths got trapped in the house.

On receiving information, police along with fire brigade officials reached the spot and recovered the three from the debris with the help of a JCB machine. While Pabitra had died by the time, Manas died on the way to hospital. Paramananda was admitted to SCB in critical condition.

Meanwhile, police have seized a few unexploded bombs and carrying out an inquiry with the help of a forensic team and a dog squad on the spot.

As per preliminary investigation, the explosion might be fallout of previous rivalry between two groups in the village.