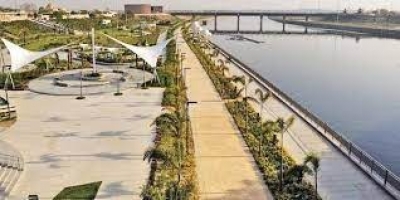 Lucknow: Trouble is brewing for two retired IAS officers in Uttar Pradesh. The Central Bureau of Investigation (CBI), which is investigating the Rs 1,500-crore Gomti riverfront scam, has sought the state government’s opinion on a probe into the role of the retired IAS officers Alok Ranjan and Deepak Singhal.

CBI sources said the agency has approached the state government for its opinion on investigating the role of the two IAS officers, which has not been probed as yet.

The CBI has sent a letter in this connection to the state’s appointment and personnel department, but the state government officials refused to confirm or deny the same.

The CBI had started investigation into the case in 2017 on the recommendations of the Yogi Adityanath government.

In November 2017, the CBI took over the case and filed an FIR against eight engineers of the irrigation department of different ranks in connection with the Gomti River Channelisation Project and Gomti River Front Development Project.

The central investigation agency on February 17 also filed a charge sheet against senior assistant Raj Kumar Yadav, two directors of a private firm associated with the project, Himanshu Gupta and Kavish Gupta, and senior advisor of the project Badri Shrestha.

The project involved construction of a rubber dam to maintain its water level, a stadium, an amphitheatre for 2,000 people, cycle and jogging tracks, a play area for children and a musical fountain.

The Enforcement Department (ED) had also filed a criminal case under the Prevention of Money Laundering Act (PMLA) in March 2018 in connection with corruption in the Gomti Riverfront Development Project.