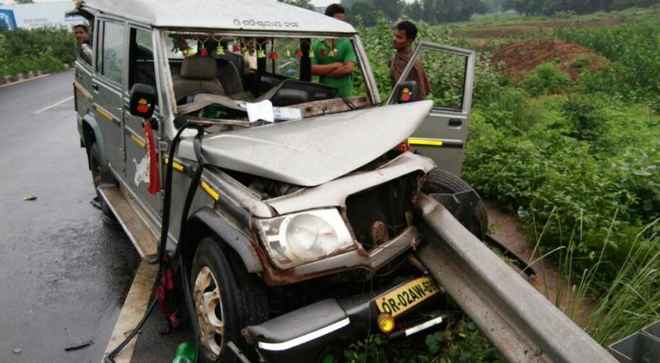 Pipili: Two persons were killed and six others were injured in road mishap in Pipili area of Puri district in Odisha this morning.

The victims were identified as Subhasmita (8), daughter of Sachikant Nayak and Sarojini Patra (50), his relative.

The injured persons were rushed to Capital Hospital in Bhubaneswar for treatment.

According to reports, Sachikant Nayak of Malipur village under Rajakanika police limit in Kendrapara district along with his family and relatives was travelling to Puri in a Bolero for Mundan rituals (tonsure) of his son in the pilgrim town. The incident occurred when their vehicle collided with the iron object fixed at road side as boundary near Dahisapatna on Bhubaneswar-Puri route.

While Sachikant’s daughter and his relative Sarojini died on the spot, his son Rishi, father Pagal Nayak (70), wife Lakhmipriya Nayak (30), relative Milli Nayak (22) and Rojalin Nayak (25) were critically injured in the accident.

The driver of the vehicle fled the spot.

On being informed about the mishap, police reached the spot and took the injured persons to Pipili hospital, from where they were shifted to Capital Hospital in Bhubaneswar.