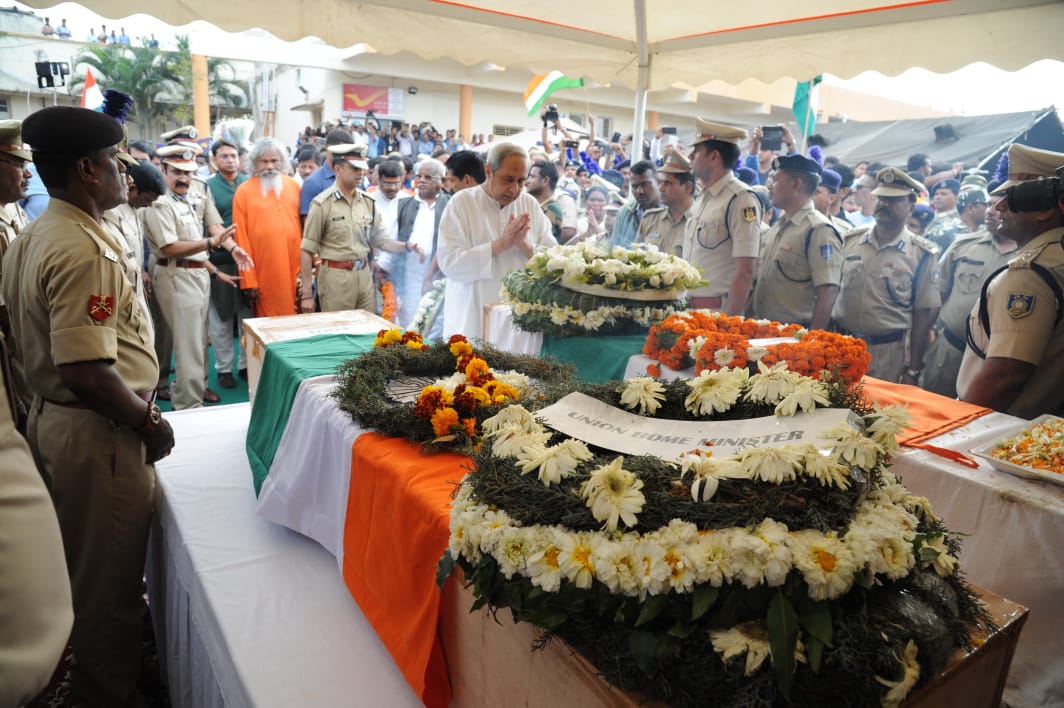 Bhubaneswar: Two Odia CRPF jawans martyred in Pulwama terror attack on Thursday were given a guard of honour here today.

Special arrangements were made by the CRPF at the Biju Patnaik International Airport (BPIA) in Bhubaneswar to pay last respect to two bravehearts — Prasanna Sahu and Manoj Kumar Behera — who died for the nation in the fidayeen attack in Jammu & Kashmir’s Pulwama district.

Wrapped in tricolour, the coffins carrying two brave soldiers were kept at a camp set up by the CRPF on the airport premises.

Chief Minister Naveen Patnaik paid floral tribute to both the martyrs at the airport. The family members of the slain soldiers broke down in tears as they are yet to accept the truth.

The martyrs received the guard of honour from the CRPF and State Police after their bodies arrived at the airport in a special aircraft.

Later, the last rites of the jawans will be performed at their respective native villages.

The mourning families, relatives and villagers of two martyrs are waiting to have last respect to the immortal souls before cremation.

Martyr Prasanna Sahu of Shikhar village under Naugan block of Jagatsinghpur district was posted as a Constable at 61 Battalions of CRPF. He had last visited his house in November last year, said his inconsolable wife, who is yet to come out of the shock.
For Manoj’s bereaved wife Ililata, the memories with her slain husband are still fresh. She is yet to accept the truth that her husband is no more. Manoj had joined CRPF in 2006. He had spoken to wife over the phone on Thursday morning, hours before the attack. The jawan attained martyrdom leaving behind his one-year-old daughter, wife and parents.

The grief spread across the State after Behera and Sahu among 42 CRPF troopers were martyred in the terror strike by a Pakistan-based terror group Jaish-e-Mohammed (JeM).

The country lost 49 bravehearts when a suicide bomber targeted a convoy at Awantipora in Pulwama district of Jammu & Kashmir on Thursday. It could be termed as the worst attack ever on the security personnel in Jammu & Kashmir as well as in the country after 2016 Pathankot attack.

According to reports, the terrorists used the Mahindra Scorpio carrying more than 350 kg of explosives and triggered the car bomb while 78 vehicles with over 2,500 CRPF personnel were on the Srinagar-Jammu highway.