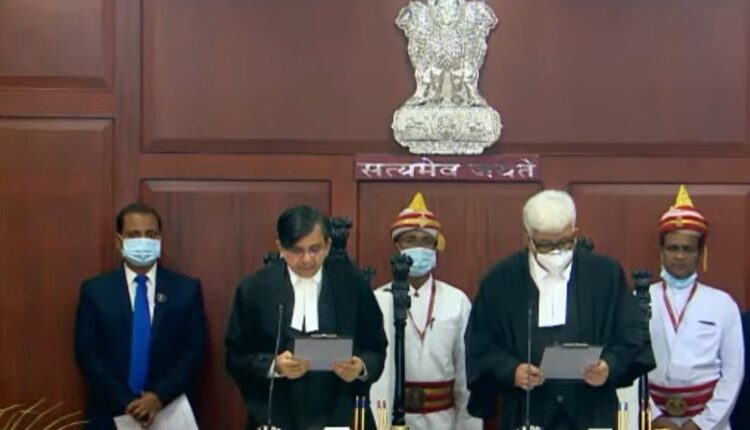 Chief Justice of Orissa High Court Justice S. Muralidhar administered the oath of office to Justice Subhasis Talapatra and Judge Sanjay Kumar Mishra at a ceremony on premises of the court.

Born on October 4, 1961, at Udaipur in Tripura, Justice Talapatra had completed his Graduation in Arts and Law from the University of Calcutta. He was enrolled at the Bar Council of Assam, Nagaland, Meghalaya, Manipur, Tripura, Mizoram and Arunachal Pradesh on September 12, 1990. He had practiced at Agartala Bench of Gauhati High Court and appeared in catena of constitutional, civil and criminal matters. He was designated as Senior Advocate on December 21, 2004.

He was sworn-in as an Additional Judge of Gauhati High Court on November 15, 2011. He took oath as the Permanent Judge of Tripura High Court on September 13, 2013.

Justice Talapatra had participated in the World Congress on Justice for Children held between March 28 and 30, 2018 at UNESCO, Paris.

On the other hand, Advocate Sanjay Kumar Mishra was appointed as the Judge of Orissa High Court following a recommendation by the Supreme Court Collegium on January 29, 2022. Born on November 14, 1967, Mishra had cleared his matriculation from Talcher Thermal High School in 1983. A Commerce Graduate from Angul Government College had completed his L.L.B degree from Madhusudan Law College in 1990. He was enrolled at Orissa State Lawyers Council on November 18, 1990. He has expertise in constitutional, labour, industries and employment matters. He was one of the key advocates in Orissa High Court.