Two novices from Odisha, 2 nuns forced to deboard train by ABVP activists in UP 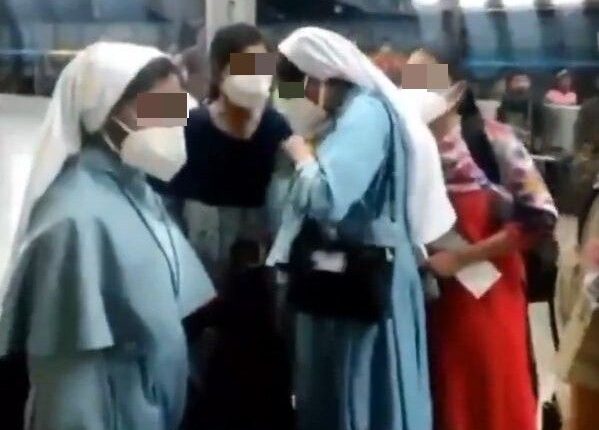 Jhansi/Bhubaneswar: Members of the Akhil Bharatiya Vidyarthi Parishad (ABVP) allegedly heckled and forced two nuns and two novices from Odisha to get off a train in Jhansi district of Uttar Pradesh.

The ABVP members had accused the nuns and novices of carrying out religious conversions.

According to reports, the incident took place on March 19 when the four were travelling in the Haridwar-Puri Utkal Express.

A 25-second video from the train compartment shows the women surrounded by some men, some of whom appear to be policemen.

“Go get your luggage. You will be sent home if what you are saying is correct,” a man is heard saying while another is heard saying, “Why are you indulging in netagiri?”

The four were allowed to proceed only after an inquiry at the railway station established there was no conversion involved.

Naeem Khan Mansuri, the Superintendent of Railway Police in Jhansi in a detailed statement said: “There were some members of the ABVP who were returning from a training camp in Rishikesh on board the Utkal express to Jhansi.

“Four Christian ladies were travelling on the same train from Hazrat Nizamuddin in Delhi to Rourkela in Odisha. Two of them were nuns and two were under training. These members of the ABVP suspected that these two nuns were taking the other two women for conversion because the nuns were speaking to the other ladies.

“They informed the Railway Protection Force that then informed the railway police. These ABVP members also gave a written complaint about conversion. I reached the spot and made inquiries. These inquiries revealed that the two other women were from Odisha’s Rourkela and were under training.

“We checked their certificates and both had 2003 baptism certificates and this proved both women by birth were Christian and that no conversion was involved. After this we sent all four women onwards to their destination in Odisha.”

Union Home Minister Amit Shah has promised action in the matter. “Those involved in the Jhansi nuns’ harassment incident will be brought before the law,” Amit Shah told reporters in Delhi on Wednesday.