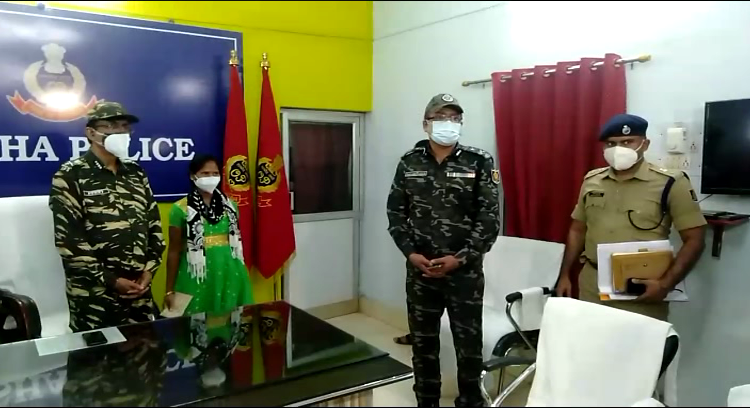 While Talso relinquished her arms to police in Koraput district, Sabita, who was carrying a cash reward of Rs 2 lakh on her head, surrendered before the DGP in Malkangiri district.

Talso, the daughter of Libri Huika of Pilbore village under Narayanpatna police limits in Koraput district, had joined the CPI (Maoist) organisation at the age of only 13 in the year 2012.

She was inducted to the Jana Natya Mandali, the cultural troupe of the banned outfit, in gross violation of child rights and depriving her of receiving formal education.

Talso was imparted military training when she was a juvenile. She worked as a party member in 3rd CRC and RK Protection team till 2015. She was promoted to the ACM in 2015 and worked in Pedabailu Area Committee till May 2021. Later, she was transferred to Boipariguda Area Committee and continued there till her surrender.

The woman Maoist had worked in diffrent areas of Koraput and Malkangiri districts of Odisha as well as in parts of Andhra Pradesh and Chhattisgarh bordering Odisha in past 9 years.

She was allegedly involved in 5 attacks on security forces along with several other incidents.

However, she realised that under the current circumstances, there are no grounds for the armed outfit to pursue the revolutionary movement in the light of welfare-oriented policies of the Government.

After surrender, she appealed to Maoist cadres to give up arms and join the mainstream.

Besides, one more Maoist carrying cash awards surrendered before Odisha Police on Sunday.

Raidhar Dhurua, working as PM and secretary of Daldali Cell surrendered before the police. He had Rs 1 lakh on his head.

He surrendered in presence of DGP Abhay at the Malkangiri SP office on Sunday morning.

They Maoists have been surrounded in view of rising Covid-19 infections among the Maoists, sources said.

The surrender and rehabilitation policy of the State Government and the organisation’s bias attitude towards Odisha cadres are said to be the reasons for leaving the path of violence.

“The State government has a good surrender and rehabilitation policy and we are putting continuous efforts to bring the Maoists to the mainstream of society,” he said.

These surrenders will motivate others to surrender and join the mainstream, he further said.

The DGP has further appealed to all to shun violence and come forward to surrender. All should join hands for furthering the developmental initiatives of the government.

The DGP and other senior officers of Odisha police, BSF also visited Temurpalli BSF camp. They reviewed the LWE scenario, interacted with BSF personnel & commended their efforts for significant progress made on the anti-naxal front in recent times, sources said.