ODISHA ANGANWADIS CRY OUT FOR ATTENTION 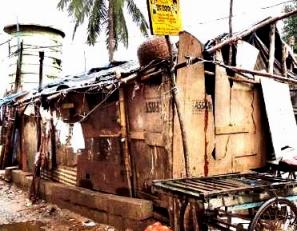 Two full years after the tragic death of seven children due to the collapse of an anganwadi Kendra in Ranpur in Nayagarh district, things have not changed one bit in the anganwadi kendras of Odisha.

Two years after the Odisha government announced undertook a thorough assessment of all anganwadi kendras in the state and promised to convert all of them into pucca buildings and ensure that they “have an atmosphere conducive for learning,” such centres continue to be as unsafe and unhygienic as they have always been.

More worryingly, even kendras in the state capital, which one would expect to be better maintained than their counterparts elsewhere, present an equally dismal picture as a reality check by our reporters on Friday revealed.

Most anganwadi kendras in Bhubaneswar are being run in dilapidated buildings which could cave in any time, or in shanties, bogus attendance is rampant and teachers are conspicuous by their absence. In some kendras, the teachers have outsourced their work to sahayikas in charge of preparing the mid day meal.
This is what a team of ‘Sambad’ reporters found on a random tour through anganwadi kendras spread across the city on Friday last.
Attendance 20, present one !

The team reaches the Anganwadi Kendra at Govind Basti in Nayapalli and finds to its dismay a lone teacher giving lessons to a lone child in a room measuring barely 5 sq ft.

On seeing the team, the teacher comes out. Asked why there was only one student, the teacher answers; “No, actually there are 20. But they haven’t turned up yet possibly because of the bad weather. They will come a little late.”

Fair enough, but how are the 20 students accommodated in this tiny apology of a class room? “We somehow manage,” said the teacher nonchalantly, perhaps expecting the team to applaud her for the incredible feat. The truth, as the team finds out, is, however, more mundane. The register invariably shows full attendance, but only a few turn up for the classes. No prizes for guessing where the food stuff meant for the missing students goes.

When the team wonders aloud where the meal for the children is cooked, pat comes the reply: “I get the stuff cooked at my house and serve the children with food here.”

Anganwadikendras are supposed to open at 8 am in the morning. But when the team reaches the Anganwadi Kendra at Munda Sahi in JayadevVihar locality at 1030 am, not a soul is to be seen anywhere in the vicinity of the Kendra. An Anaganwadi Kendra with neither students nor teachers!

Asked when the Kendra opens, a local youth is at his sarcastic best. “It could open after some time or not at all. There is no fixed timing,” he says.

The next stop of the ‘Sambad’ team is the nearby Vajpayee Nagar where the Anganwadi Kendra functions from the office of the local corporator belonging to the ruling party!

There is no teacher and the 8-10 students are in the care of a sahayika. Dal is being cooked on a stove in a small pressure cooker with the poor sahayika having to keep an eye both on the children as well as the pressure cooker.

The Anganwadi Kendra at Mali Sahi in Unit-III area is the last stop of the day for the team, which finds to its horror that the Kendra functions from a structure (shanty) with 75 percent of it in a damaged state. Mercifully, the centre is locked. With incessant rains for the last few days, the structure is in serious danger of caving in any moment. A repeat of the Ranpur tragedy cannot be ruled out in this structure.

The real shocker for the team, however, comes when teachers at some of the Anganwadi Kendras attempt to bribe it. They offer eggs and chhatua in return for burying the report!

A woman teacher in a Kendra in the basti near Regional Science Park, in fact, has the temerity to warn the team against taking photographs of the centre. Without entering into an argument with her, the team retreats from the place.

This being the state of anganwadi kendras in the heart of the capital city, which for obvious reasons is constantly in media glare, it is easy to imagine the condition of the kendras in the remote areas of the state.

It is now clear that the reassuring words of the Naveen Patnaik government after the Ranpur tragedy two years ago were mere platitude, intended to see the storm blow over, something that has become its trademark over the last 14 years.

It neither has the inclination nor the capacity to turn things around.