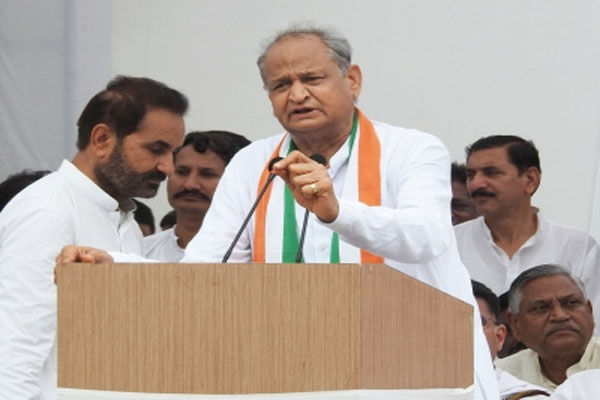 Jaipur: Rajasthan Chief Minister Ashok Gehlot has convened a high-level meeting on Wednesday to review the law and order situation in the state after an Udaipur-based tailor was beheaded for supporting BJP leader Nupur Sharma, and suspected an international link to the murder.

The chief minister, who was in Jodhpur on a three-day visit, cancelled his trip and left for Jaipur this morning.

Suspecting an international link, Gehlot asked: “Was there a plan and conspiracy? With whom is it linked? What is an international link? All these things will be revealed. There are some anti-social elements, unless they come together, such an incident does not happen. Investigation is on from this angle also, he said.

All the officers of CS, DGP, Home and Police Department will be present in the meeting called to review the law and order situation in the state.

Meanwhile, a huge police force has been deployed in Udaipur after the murder of Kanhaiyalal. Curfew has been clamped in seven police stations where mobile and internet services have been suspended for 24 hours as a precautionary measure in Rajasthan. Section 144 has also been imposed in the state for one month.

Further, the opposition BJP has called a bandh. The post-mortem of the deceased Kanhaiyalal Sahu has been conducted and his body handed over to his family for last rites.

Two accused — Ghaus Mohammad and Riyaz Jabbar — have been arrested in connection with the murder. NIA and SIT have reached Udaipur to interrogate them. After interrogation, the NIA is likely ro talk over the investigation.

Leader of Opposition Gulabchand Kataria also reached Udaipur to meet Kanhaiyalal’s family members. He said- this is government’s intelligence is failure. There is no more fear among criminals.