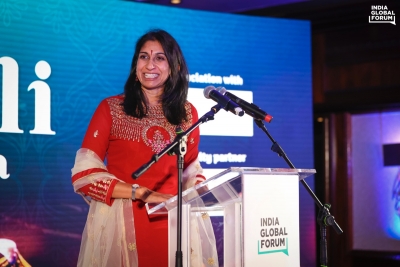 London: Led by Home Secretary Suella Braverman, British MPs have raised their pitch for the India-UK Free Trade agreement at a Diwali event organised by the India Global Forum (IGF) in London.

“Building closer India-UK trade and security partnerships is of huge value to both our nations,” Braverman tweeted on Tuesday.

“There is an economic imperative for our countries to work together, which is why we are so eager to secure a trade deal,” the Indian-origin minister, who was in the eye of the storm over her controversial remarks about Indians forming the largest group of visa over-stayers, said.

Braverman’s outburst prompted India to say both the nations should “honour” the “understanding” with regards to migration mobility.

Media reports also said that the deal, targeted to be signed before Diwali, was on the verge of collapse following India’s fury over comments on immigrants made by Braverman, whose Indian-origin parents emigrated to the UK in the 1960s.

“Our trade deal with India will bring our two nations even closer, building on the over 24 billion pounds of goods and services we exchanged last year,” junior Trade Minister Greg Hands said in a tweet after attending the event, which saw participation by senior parliamentarians, business leaders and diplomats.

According to official government data, India-UK bilateral trade currently stands at around 24.3 billion pounds a year and the aim is for that to be at least doubled by 2030.

“We in the @UKLabour long & hope we will get a trade deal with India & we hope the visa obstacles will be overcome,” David Lammy, Labour MP for Tottenham, wrote in a tweet

The Indian government is seeking additional work and study visas for its residents, as well as a new visa modelled after an agreement with Australia and New Zealand that permits people under the age of 35 to live in the UK for up to three years.

“I want to see our trading partnership with India go from strength to strength; @UKLabour is determined to make progress on the trade deal with India as a pro-business and pro-trade party,” Labour MP Nick Thomas-Symonds said.

Former Prime Minister Boris Johnson had set the Diwali deadline for the trade deal with India, but new Trade Secretary Kemi Badenoch recently said that her country was no longer working to that deadline.

According to media reports, India and the UK deadline for concluding an FTA may be pushed back to November due to persisting differences in migration, automobiles and liquor tariffs.

Braverman, who was dressed in an Indian attire for the celebrations, also spoke about her personal connection with India and said that “India is in her soul”.

“India is in my heart, my soul & Diwali is a magical time to celebrate Indian culture in the UK,” she tweeted.

Huge hike in airfare from Delhi, Mumbai to Patna