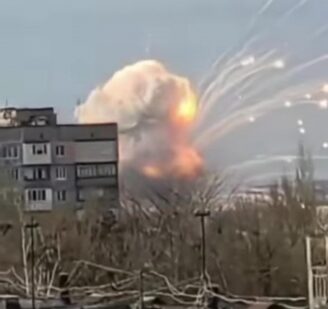 New Delhi: Ukrainian forces took to the streets of Kiev on Friday with national guard troops pictured lining up defensive positions along a highway shortly before the sounds of gunfire and explosions rang out as they battled Russian forces for control of the capital, Daily Mail reported.

Russian President Vladimir Putin’s men are now thought to be inside the city, though their exact location and number is unclear.

Fighting was reported in Obolon, on the city’s outskirts, in the early hours as the ministry of defence told residents to make Molotov cocktails to ‘repel the occupiers’. Russian forces were also spotted in Vorzel, Bucha, Irpen districts, the report said.

The Russian troops are thought to have arrived from the north-east, having pushed down from Chernobyl which was captured late on Thursday. More Russian troops and armour are advancing on the capital from Konotop, in the east, having bypassed the city of Chernihiv where they ran into heavy Ukrainian resistance, Daily Mail reported.

Anton Herashchenko, an advisor to Ukraine’s Interior Minister, said Friday will be the war’s ‘hardest day’.

Once Kiev is surrounded, US intelligence believes the plan will be for Russian special forces to move in and seize an airport – likely Sikorsky or Boryspil – which would then be used to fly in a much larger force of up to 10,000 paratroopers who would assault the capital.

The job of the paratroopers would be to enter the city, find Zelensky, his ministers, and parliamentarians, before forcing them to sign a peace deal handing control of the country back to Russia or a Moscow-backed puppet regime – effectively ending the war without Putin’s ground forces needing to complete the difficult and bloody task of seizing and occupying the whole country.