UN chief hints at effort to loosen sanctions against Russia 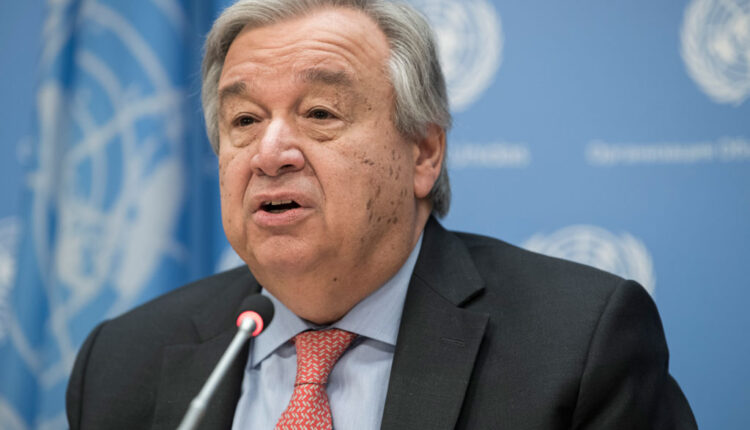 United Nations: UN Secretary-General Antonio Guterres has hinted at an effort to loosen some aspects of the sanctions against Russia and Belarus to mitigate the food and energy crises that is engulfing the world.

“Let me be clear, a meaningful solution to global food insecurity requires reintegrating Ukraine’s agricultural production and the food and fertiliser production of Russia and Belarus into world markets, despite the war,” he said on Thursday while briefing the Security Council.

“I will do my best to help facilitate a dialogue to help make this a reality. We need quick and decisive action to ensure a steady flow of food and energy in open markets, by lifting export restrictions, allocating surpluses and reserves to those who need them, and addressing food price increases to calm market volatility.”

After a visit to Russia and Ukraine late last month, Guterres went to Senegal, Niger and Nigeria, where he said: “I heard direct testimony from leaders and civil society on how the war is unleashing a food security crisis.”

Various international sanctions on Moscow, including those on financial transactions, have restricted its exports of foodgrains and on Russia and Belarus have limited the availability of key ingredients for fertiliser.

World Food Programme’s (WFP) Chief Economist Arif Husain had warned on Wednesday that a shortage of fertilisers could affect the production of foodgrains in the next cycle and worsen the situation.

US Permanent Representative Linda Thomas-Greenfield accused Russia of intensifying the food crisis by its blockade of Ukrainian ports.

“Russia is actively halting Ukrainian agricultural production and blocking the ports that once provided food to those in dire need.

“While we work to stop this blockade and hold Russia to account for its actions, we will all be called to step up and prevent looming famines, and provide more food and funding in the name of decency and humanity,” she said.

Russia and Ukraine together account for about 30 per cent of the global exports of wheat.

In his briefing, Guterres also highlighted the evacuation of civilians trapped in the “hellscape” of Mariupol, a Ukrainian city besieged by Russia, which is one significant achievement of the UN during the war.

“I entered an active war zone in Ukraine with no immediate possibility of a national ceasefire and a full-scale ongoing attack on the east of the country.”

But in his meeting with Russian President Vladimir Putin, he said he emphasized that “the imperative of enabling humanitarian access and evacuations from besieged areas, including first and foremost, Mariupol”.

A short time later, the UN chief said he received Moscow’s agreement and “I am pleased to report on some measure of success”.

In two rounds of evacuations, 480 people have been able to leave the Mariupol area and another round is underway, he said.

“I hope that the continued coordination with Moscow and Kiev will lead to more humanitarian pauses to allow civilians safe passage from the fighting and aid to reach those in critical need.”

During his meetings with Putin in Moscow, he said that he did not “mince words”, telling him that “Russia’s invasion of Ukraine is a violation of its territorial integrity and of the Charter of the UN”.

UN High Commissioner for Human Rights Michelle Bachelet said that her office has recorded 6,731 civilian casualties since the Russian attack on Ukraine started on February 24.

“Most of these casualties have been caused by the use of weapons with wide-area effects in populated areas, such as shelling from heavy artillery, including multiple launch rocket systems, and missile and air strikes.”

Listing other atrocities in the war, Bachelet said: “My staff heard about cases of women having been raped by Russian armed forces in areas that were under their control, as well as other allegations of sexual violence by both parties to the conflict.”

WhatsApp rolls out emoji reactions for its users