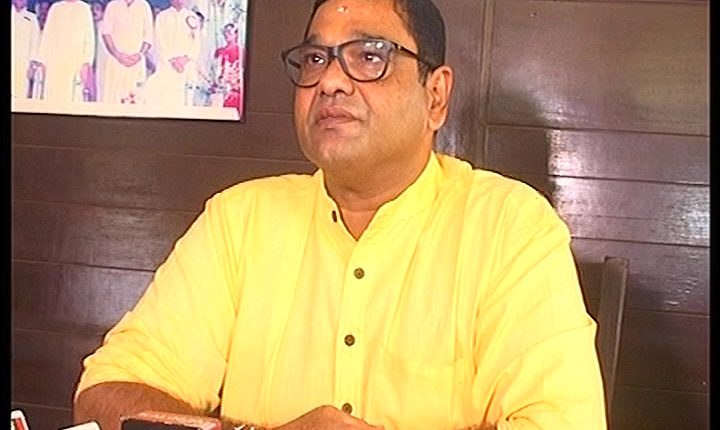 Bhubaneswar: In what appears to be a desperate move to salvage his battered image, BJD MLA from Barabati-Cuttack, Debasis Samantray, came up with a bizarre reason today, apparently to gain some public sympathy. The MLA has claimed he had made Pulwama martyr’s kin to sit down as the latter was pushing Union Minister Jual Oram during the presentation of the guard of honour to slain CRPF jawan Manoj Behera.

“I had made him (kin of Manoj Behera) to sit down holding his hand as he pushed Union Minister (Tribal Affairs) Jual Oram during the guard of honour. I had no other intention,” the visibly-shaken Samantray told the media in a choked voice.

The MLA drew heavy flak after a video of him showing pushing and shoving the kin of the Pulwama martyr near the latter’s coffin on Sunday.

Urging everyone, including the media not to do politics over the matter, the BJD leader, whom the opposition Congress and BJP had strongly criticised for his shameful public behaviour, said: “I am extremely sorry and seek forgiveness if it has hurt someone. And, I wish the matter shouldn’t be politicised.”

“I have highest regard for the martyr (Manoj Behera) and his family members,” the legislator asserted.

Soon after the video went viral, the MLA was in the storm and had received stinging criticism from people all walks of life for his ‘unbecoming’ public conduct at a sombre occasion.

Condemning the incident, Union Minister of Petroleum and Natural Gas, Dharmendra Pradhan, said: “The Chief Minister should take immediate action against the MLA.”

In social media too, the legislator was brutally trolled and criticised for ‘misbehaving and manhandling’ with the martyr’s kin.

In the video, Samantaray was seen yanking an older man and shoving him down by the scruff of his neck near the casket carrying the body. The incident occurred as Behera was about to be given a guard of honour by security personnel on Sunday.