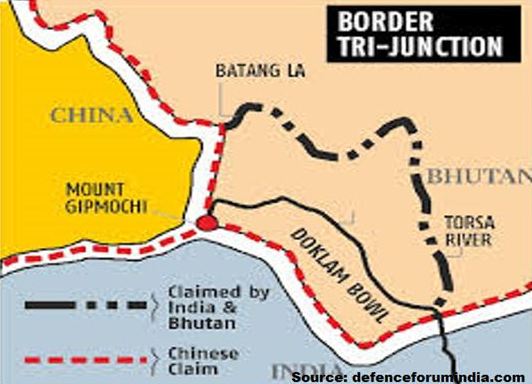 The Chinese intrusion into the Doklam plateau of Bhutan on 16 June 2017 to construct a motorable road to connect Doklam with the narrow Chumbi valley in the Tibet Autonomous Region has created deadlock between Beijing and New Delhi. The Indian forces entered into Doklam to prevent Chinese brinksmanship over Doklam as per the Indo-Bhutan bilateral agreement of 2007 and Indo-China agreement of 2012 for retaining the status quo of tri-junction. India is quite clear that Beijing’s unilateral action  by flouting the existing documents has not only posed threat to the sovereignty and territorial integrity of this Happiness Kingdom, but it has also risked the peace and stability of the Himalayan frontier. Moreover, Indian  strategic think tanks viewed that  the Chinese unilateral decision to change the tri-junction between India, Bhutan and China would give Beijing a deeper strategic depth, and facilitate her to expand its hegemonic doctrine in the trans-Himalayan region putting fresh challenges to the Indian territory at narrow Siliguri corridor.

India is committed to protect the sovereignty and territorial integrity of Bhutan as per the Indo- Bhutan agreement of 1949 which was succeeded by Indo-Bhutan agreement of 2007. Article 2  of 2007 treaty spelt out that “In keeping with the abiding ties of close friendship and cooperation between Bhutan and India, the Government of the Kingdom of Bhutan and the Government of the Republic of India shall cooperate closely with each other on issues relating to their national interests. Neither Government shall allow the use of its territory for activities harmful to the national security and interest of the other.” Thus, in this context, Indo-Bhutan treaty allows both India and Bhutan to work closely to secure their national interests without using their territory to the detriment of the other. Hence, Beijing should respect international treaties and obligations and should not escalate tension at the tri-junction. India is ready for a diplomatic solution to the Doklam standoff. As the Ministry of External Affairs, Government of India said in a statement to the media: “We will continue to engage with the Chinese side through diplomatic channels to find a mutually acceptable solution. Government remains prepared it is the country’s responsibility to ensure security of its citizen and its territory.”

The Chinese intervention in Doklam violates the India-China agreement of 2012 which calls for maintaining the ‘status-quo of tri-junction point pertaining to India-Bhutan and China’. On the other, China cites 1890 treaty to justify her claim over Doklam. Article 1 stipulated “The boundary of Sikkim and Tibet shall be the crest of the mountain range separating the waters flowing into the Sikkim Teesta and its affluents from the waters flowing into the Tibetan Mochu and northwards into other rivers of Tibet. The line commences at Mount Gipmochi, on the Bhutan frontier, and follows the above-mentioned water-parting to the point where it meets Nepal”. But the cartographic understanding of the subject indicates that the watershed principle agreed upon the 1890 convention clearly shows Batang-la as the tri-junction point, not any point beyond towards the south, but the Chinese demarcation of Mount Gipmochi as the tri-junction is purely unilateral and hegemonic in nature. The Foreign Ministry of Bhutan has also said that the road construction inside the Bhutanese territory directly flouts 1988 and 1998 agreements reached between Bhutan and China, as a result Thimphu has urged Beijing to maintain the status quo as before June 16, 2017. Rebutting such Chinese claims, the Ministry of External Affairs (MEA) also issued a letter by saying that “the Indian side has underlined that the two Governments had in 2012 reached agreement that the tri-junction boundary points between India, China and third countries will be finalized in consultation with the concerned countries. Any attempt, therefore, to unilaterally determine tri-junction points is in violation of this understanding. It is essential that all parties concerned display utmost restraint and abide by their respective bilateral understandings not to change the status quo unilaterally. It is also important that the consensus reached between India and China through the Special Representatives process is scrupulously respected by both sides.”

Siliguri corridor – a narrow piece of land mass, called Chicken’s neck, is situated in the north of West Bengal and gives passage to India’s eight Northeastern states (Assam, Arunachal Pradesh, Manipur, Meghalaya, Mizoram, Nagaland, Sikkim and Tripura) with the rest of India. The corridor is the  nucleus of road and rail networks that provides link  to  all the capitals of eight sisters and vital military posts/installations along the line of Actual control (LAC). It could also be a potential shield to thwart any Chinese aggressive military design in India’s eastern sector. Beijing very well knows that India enjoys these geo-political/strategic advantages over China in Bhutan-Tibet sector and can spoil any kind of Chinese perilous design from across the border. Thus, it seeks to expand its strategic orbit towards the south of Doklam at a point called Gimochin to change the strategic equations vis-a-vis the Siliguri corridor. At present, its strategic depth is only confined to Yadong in the Chumbi valley. It is pertinent to mention here that China has already encircled India in the western sector through China Pakistan Economic Corridor (CPEC) which passes through Pakistan occupied Kashmir (POK). So any kind of Chinese infrastructure build-up at Doklam might lead to similar Chinese encirclement in India’s eastern sector. The strategic  watchers apprehend that in the event of any Chinese misadventure, it might block the narrow corridor and  disrupt  the life line of connectivity  between India’s North east and rest of India.

Notwithstanding China’s motives, the way out is to maintain peace and tranquility at the tri-junction through the disengagement of troops. Moreover, the current situation demands China should first withdraw its troops from Doklam following which India would start retreating its forces from the stand-off area to preserve the status quo as before 16 June 2017.  As we know, the success of India and China lies neither in war nor in military conflict, but rests on peace and economic development of both the nations. Instead of armed preparedness or hiking of defence budgets, India and China should tap their soft power resources in health, education, agriculture, industry, energy, hydrology, environment, space, tourism, innovative research and cross border collaborative projects to steer the destiny of 21st Asia through harmony and shared prosperity. As Deng Xiaoping said “Only when China and India develop well, can one claim that the century of Asia has come. If China and India strengthen cooperation, Asian unity, stability and prosperity will be very hopeful; the world will be in peace and make more progress.”

*The writer is an Associate Professor at the Department of Political Science, Jomin Tayeng Government Model Degree College, Roing, Arunachal Pradesh. He was formerly a Visiting Scholar at the Gulf Studies Programme, School of International studies, Jawaharlal Nehru University, New Delhi. The inputs of this article are largely derived from his recent article on Doklam published in Mainstream Weekly, New Delhi. He may be contacted at [email protected]