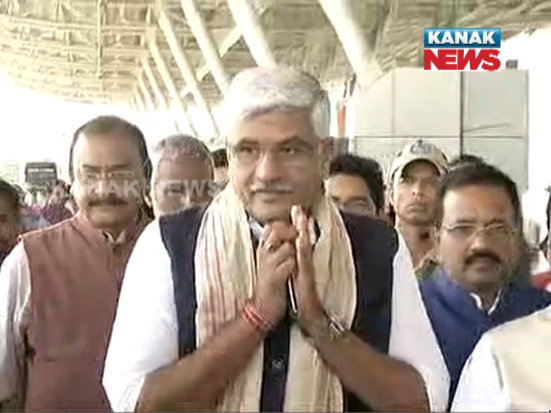 Bhubaneswar: Union Minister of State for Agriculture Gajendra Singh Shekhawat visited Odisha on Sunday to assess the drought situation and pest menace, sparking a war of words between him and the Biju Janata Dal state government.

While Odisha Agriculture Minister Damodar Rout accused the Central government of infringing into the state government’s rights, Shekhawat said there is no need for discussion with it on farmers’ problems as the Centre is committed and answerable to the people of the country.

Rout said even though agriculture is a state subject, the Union Minister has visited the state without taking the state government into confidence.

“There is no problem in the visit of a Union Minister. But, Centre sends a team to analyse crop loss on the state’s request,” he said

Rout also blamed Shekhawat of “campaigning for the BJP on public funds” and contended that while the state government is taking all possible steps for farmers’ benefit, the Central government is not cooperating.

In response, Shekhawat said it is the duty of the Union government to address the farmers’ issue.

“Farmers of 14 districts are now facing drought and pest menace in Odisha. It is the duty of the Union government to address the farmers’ issue and for that we do not need the permission of the state government,” he said.

He, however, assured to solve the farmer’s issue in cooperation with the state government.

Shekhawat, along with a Central team, is on a two-day visit to the state (IANS)

Missed 90m mark, but happy I came up with my best throw…