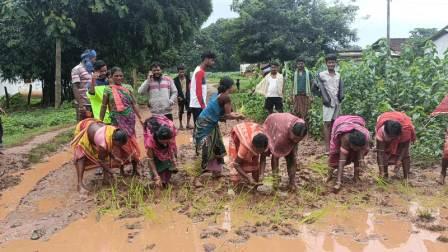 Maidalpur: The villagers of Maidalpur under Papadahandi block in Nabarangpur district today planted paddy saplings on a muddy road to protest against the administration’s callousness to improve road communication to their village.

The villagers claimed that a 5-km stretch of Maidalpur-Rabanaguda road is in a bad condition. Even, the villagers are facing difficulties in availing ambulance service due to the muddy road.

According to sources, at least 50 families of Rabanaguda, 100 families of Kantasaru and 60 families of Mundibeda and Dangariguda each are also depending upon the muddy road for communication.

The villagers have urged the administration on several occasions to improve road communication to Maidalpur but to no avail.

“Politicians used to give a lot of promises during elections. But, they do not keep their promises. We plant paddy saplings on the muddy road to protest against the administration for its callousness to lay a concrete road for us,” said many villagers of Maidalpur including Rukmuni Majhi, Debaki Patra, Janaki Dalei and Sangita Paricha.

Local sarpanch Chandradhwaj Majhi said the panchayat executive officer has not visited Maidalpur for last several days. “We are unable to execute many developmental works due to the absence of the PEO. Anyway, I will try to repair the road by spending money from my own pocket,” he said.