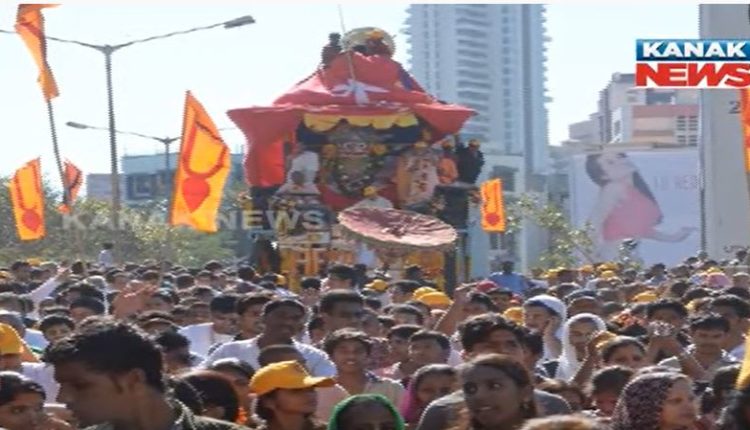 Mumbai: The untimely Rath Yatra of Lord Jagannath organized by the International Society for Krishna Consciousness (ISKCON) today in Mumbai’s Shivaji Park has sparked resentment among people of Odisha.

“When the world-famous Rath Yatra is held in Puri in July, what is the point of organizing another chariot procession on Basant Panchami in another State,” asked Gobind Sahu, a devotee of Lord Jagnnath.

Expressing similar views, another devotee Nirmala Panda said the ISKCON has commercialised the religion. They are trying to cheat people.

Ritual administrator of SJTA, Jitendra Sahu said, “The temple administration has no information about the ISKCON Rath Yatra so far. During a meeting chaired by Puri King Gajapati Dibyasingh Deb in Bhubaneswar, discussions were held with the ISKCON representatives who had agreed not to hold untimely Rath Yatra,” adding the SJTA will hold talks again with them.

Earlier in the day, the ISKCON organized a chariot procession of Lord Jagannath, Baldev and Subhadra Maiya idols.

The theme for this year was ‘Puri Dham’ and a replica was erected at Shivaji Park with huge seven-foot tall idols of Lord Jagannath, Baldev and Subhadra Maiya.
The Maha Aarti for Lord Jagannath was performed by Radhanath Swami and then devotees pulled the chariots from Shivaji Park to Shiv Sena Bhavan, Portuguese Church, Gokhale Road, Prabhadevi and back to Shivaji Park.

In November, ISKCON had planned to organize Rath Yatra in Ludhiana, Punjab. But after Khandapada MLA Soumya Ranjan Patnaik had raised the issue in Odisha Assembly and a police complaint was filed in Puri, ISKCON refrained from organizing the Rath Yatra.