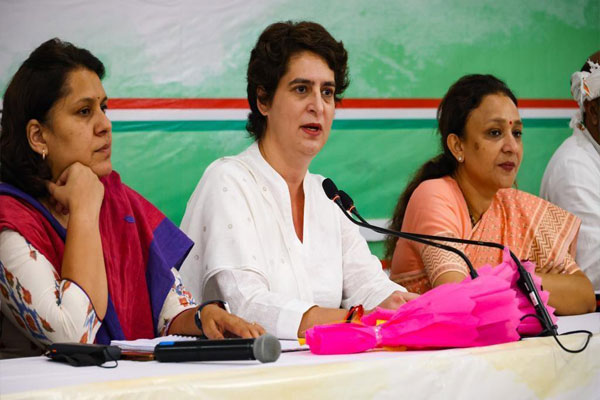 Lucknow: In a major decision that could prove to be a game-changer for the Congress, in particular and, Indian politics, in general, Congress General Secretary Priyanka Gandhi Vadra, on Tuesday, announced that her party would give 40 percent tickets to women in the upcoming Assembly elections in Uttar Pradesh.

She said that all women who want to bring about a change in the system, are welcome to come forward and contest elections.

“Any woman who wants to contest can give an application till October 15,” she announced at a press conference.

Priyanka said the decision was for the woman named Paro, who had held her hand in Prayagraj and had said that she wanted to join politics.

“This decision is for Vaishnavi in Chandauli and the sisters-in-law of two rape victims of Hathras and Unnao, who are fighting for justice and against the system.

“This is for every woman who wants to be heard — whether it is Laxmi Valmiki of Lucknow who wants to be a doctor, the daughter of journalist Raman Kashyap who was killed in Lakhimpur Kheri violence.

“This is also for two women constables — Madhu and Pooja, who arrested me in Sitapur and were with me till 4.a.m. Power today amounts to trampling over the weaker sections of society, primarily women,” Priyanka said.

She said that women were not only stronger but more compassionate and sensitive and could bring a change in the political system.

Asked whether the same formula of 40 percent reservation for women would be extended to the Congress-ruled states, including Punjab, Priyanka said, “I am in charge of UP and we have taken this decision here. If they (Punjab), they are welcome to implement the formula.”

She said that women were being divided on the basis of caste which weakened their battle for justice.

“A woman’s struggle is not limited to a gas cylinder or Rs 2,000. It goes beyond that. We have to rise above the shackles of casteism and communalism and come together as a group,” she said.

Priyanka, when asked whether wives and daughters of leaders would not take advantage of this reservation, said, “What is wrong with that if it leads to empowerment. In Amethi, a village pradhan’s wife contested and won elections. After some months, he met me and said that his wife has started making decisions in the house as well. This is empowerment.”

She said Congress would help women fight elections and next time, they will be stronger. She further said that the candidates would be decided on the basis of merit.

Priyanka, however, parried questions about the chief ministerial candidate of the Congress in Uttar Pradesh and whether she would contest elections.

“These issues will be decided later and we will let you know,” she stated.

Talking about the opposition onslaught on her, Priyanka said, “The other parties should get more creative when they attack me. Political tourist and Twitter leader have become stale,” she said.

World Osteoporosis Day: Significance, History and all you need to know