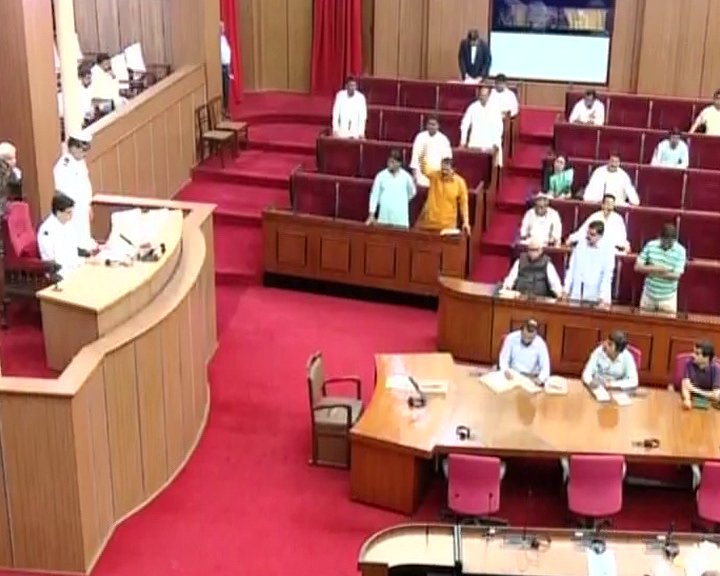 Odisha Assembly today witnessed huge uproar by opposition Congress over death of a farmer in Bargarh district following which the house was adjourned for several times.

The Congress members including Tara Prasad Bahinipati shouted slogans against the government over farmers’ suicide and rushed into well of the House. Unable to run the House, Speaker Niranjan Pujari adjourned till 5 pm.

The Congress members disrupted the House proceedings in the morning demanding debate on farmer’s death and distress sale of vegetables in the state. Raising concern over the farmers’ suicide in the past years, the opposition held the government responsible for death of Bargarh farmer, who consumed poison yesterday night under the pressure due to crop loss.

Pujari adjourned the House till 11.30 am. When the House resumed, the Congress members again created logjam over the issue. They demanded compensation for families of the farmers who ended their lives due to crop loss.

The House was later adjourned till 3 pm for the second time.

The logjam continued in the House even after 3 pm. The House was again adjourned till 4 pm and later till 5 pm.

Opposition creates ruckus in Assembly over absence of ruling…

During Zero Hour, Leader of Opposition Narasingh Mishra blamed the Naveen Patnaik government’s “apathetic and lackadaisical attitude” for the deaths of farmers and distress sale of vegetables.

“Farmers are growing vegetables in large quantities but there is no market to sell the produce. So they had to throw it on the streets. Besides, the government has not provided cold storage facilities to them,” said Mishra.

He also blamed the November 8 demonetisation for distress sale of vegetables, saying there were no buyers due to shortage of small denomination currency.

“Both the Prime Minister and the Chief Minister visited Bargarh district in 2016 when farmers’ deaths were reported, but nothing special was announced for farmers. Similar cases have started occurring in 2017 too but the state government remains a silent spectator.”

Countering to Mishra, BJD MLA Sushant Singh said, “Although, the farmers are taking extreme step, a probe is needed to know the exact reason behind the farmers’ suicide”.

Bharatiya Janata Party MLA Pradeep Purohit told media persons that the ruling BJD and the opposition Congress have entered into a clandestine alliance and conspired to disrupt the house proceedings.

(With inputs from IANS)