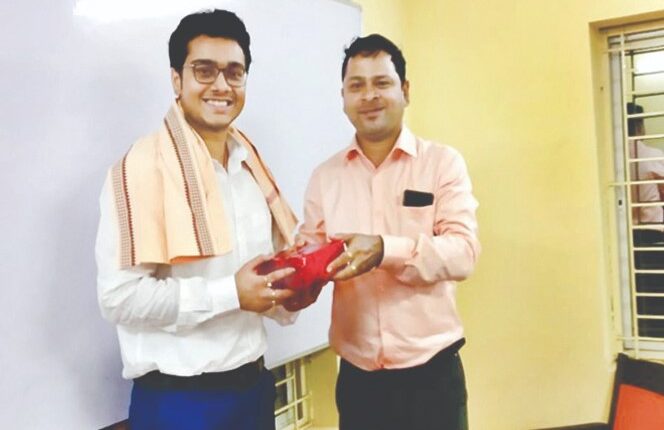 Bhubaneswar: Jubin Mohapatra from Odisha was figured in top 50 list of candidates cracked the Civil Services Examination 2020, whose results were declared by the Union Public Service Commission (UPSC) yesterday.

He ranked 46th in the examination. He made it to top 50 after third consecutive attempts.

“I am feeling very happy for the rank I secured in the examination. I underwent toughest period to get prepared for the examination amid Covid pandemic. Along with my job, I was focusing on my studies for the Civil Services Exam. Now my dream to become an IAS officer has come true,” Jubin told Sambad.

Jubin, an alumnus of Indian Institute of Technology (IIT) Roorkee, had earlier cleared the examination with 235th and 379th ranks in 2018 and 2019 respectively. It was his third attempt to get a good rank in the examination.

He said that he had not received formal coaching for the examination.

“I had completely relied on internet for preparation. I was taking part in ‘Apti Plus’, an interview guidance programme. Since I was into a job, time management was a big challenge for me to pursue studies for Civil Services,” he told media.

Apart from Jubin, 10 more candidates including a doctor from Odisha successfully cleared the tough competitive examination. Last year, two from the State were in top 10 list.

After completing engineering degree in Computer Science, Ankit was selected for a job with the TCS. However, he had refused the offer and joined his family business. Later, he started preparation for Civil Services Exam in the year 2015. He cleared it in his final attempt.

Dr. Reena Pradhan is currently posted at a State-run hospital in Nabarangpur since 2019. She worked hard for the examination amid adverse situation during the pandemic.

Total 761 candidates across the country have cleared the examination this year, of which 11 from Odisha have been placed in different ranks for appointment in the Indian Administrative Service (IAS), Indian Foreign Service (IFS), Indian Police Service (IPS) and other central government services in Group A and Group B level.

UPSC extra chance: SC asks why not one-time relaxation, if…