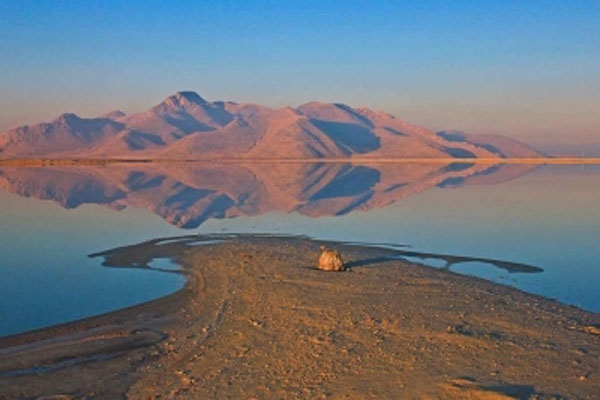 Washington: The most iconic landmark of the US state of Utah, the Great Salt Lake is rapidly disappearing and on the verge of becoming an environmental disaster zone, according to experts.

It is the largest saltwater lake in the Western Hemisphere and the eighth-largest terminal lake in the world, and “lies in the northern part of Utah and has a substantial impact upon the local climate, particularly through lake-effect snow”, according to Brittanica.

The expansive lake borders Utah’s largest city and capital, Salt Lake City, home to some 1.2 million residents, according to the US Census Bureau.

Last summer, the water level in the Great Salt Lake reached its lowest point on record with average daily elevation of 4,190.2 feet.

As of Thursday, the southern portion of the lake still sits at the record low, which is about 1.2 feet below the previous record set in October 1963, according to US Geological Survey (USGS) information collected at the SaltAir gage.

“Toxic dust warnings might be our future as the Great Salt Lake shrivels up,” The University of Utah’s KUER public radio reported on Monday.

Researchers have found that for over a century, the lake bed has been slowly accumulating byproducts of human activities like mining, smelting, and agricultural runoff, the KUER report added.

“As the lake disappears, the exposed bed turns into dust that contains elevated levels of potentially toxic heavy metals and chemicals like arsenic,” it added.

Utah’s Department of Natural Resources said the Great Salt Lake may be weeks from dropping to a new historic low, KUER reported, and that “lawmakers had recently suggested looking into building a Pacific Ocean pipeline to bring water to the lake”.

A report in The New York Times earlier this month warned of “an environmental nuclear bomb” regarding the shrinking Great Salt Lake, saying “the lake bed contains high levels of arsenic and as more of it becomes exposed, wind storms carry that arsenic into the lungs of nearby residents, who make up three-quarters of Utah’s population”.

Large particulate matter from the Great Salt Lake can get stuck in respiratory systems, Maura Hahnenberger, an associate professor of geosciences who studies dust storms at Salt Lake Community College, told the media.

“They might get caught in your nose and your sinuses in your mouth and in the upper part of your breathing airway. And so that can cause symptoms like coughing, a sore throat, stuffy nose, but not as many kinds of long-term health impacts,” she said.

“But the really small particles that we call PM 2.5, those are able to go a lot deeper into people’s lungs that can cause inflammation in the lungs and can cause respiratory issues, definitely, but also cardiovascular issues.”