US journalist shot dead near Kyiv 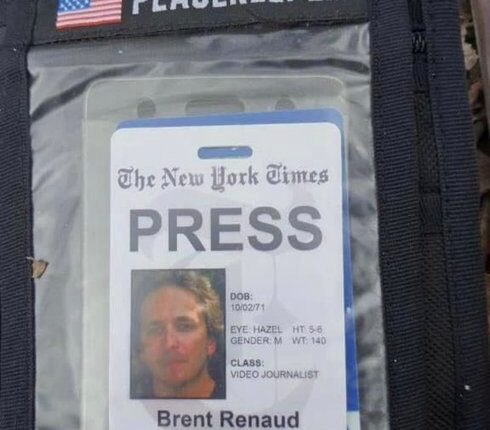 New Delhi: US journalist, Brent Renaud, has been shot dead in the town of Irpin outside Kyiv, police say, BBC reported.

Kiev’s police chief Andriy Nebytov said he had been targeted by Russian soldiers. Two other journalists were injured and taken to hospital.

It is the first reported death of a foreign journalist covering the war in Ukraine, BBC reported.

Photographs are circulating showing a press ID for Renaud that was issued by the New York Times.

In a statement, the newspaper said it was saddened to hear of Renaud’s death but that he had not been working for the newspaper in Ukraine.

He last worked for the newspaper in 2015, the NYT said, and the press ID he was wearing in Ukraine had been issued years ago. It was not immediately clear who Renaud was working for in Ukraine.

US National Security Adviser Jake Sullivan says the US will impose “appropriate consequences” on Russia. News of the death was “shocking and horrifying”, he said, and US officials would be consulting with Ukrainian officials to determine “how this happened”, BBC reported.

Another US journalist, Juan Arredondo, was taken to hospital after the incident. He told an Italian reporter that he was with Renaud when they came under fire.

“We were across one of the first bridges in Irpin, going to film other refugees leaving, and we got into a car, somebody offered to take us to the other bridge and we crossed a checkpoint, and they start shooting at us.

“So the driver turned around, and they kept shooting; there’s two of us. My friend is Brent Renaud, and he’s been shot and left behind.”