US military aircraft crashes in Norway 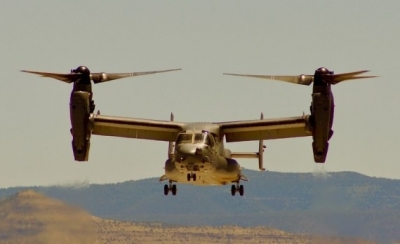 Copenhagen: A US military aircraft with four crew members crashed in Norway while participating in a NATO exercise, authorities have confirmed.

According to Hovedredningssentral (HRS), or the Joint rescue coordination centre, in northern Norway, the Bell-Boeing V-22 Osprey, a twin-engine vertical take-off military aircraft, was on a training mission on Friday when it went missing shortly after failing to arrive at its planned destination of Bodo, reports Xinhua news agency.

According to Jan Eskild Severinsen, press officer at the HRS, debris was discovered at 9.17 p.m. near Gratadalen, a valley south of Bodo known for its caves.

Ground crew have since been dispatched and were still yet to arrive at the crash site, but there were no indications of anyone surviving the crash.

The plane was taking part in the combined land, sea and air NATO exercise dubbed Cold Response, which started on March 10 and will run through April 10.