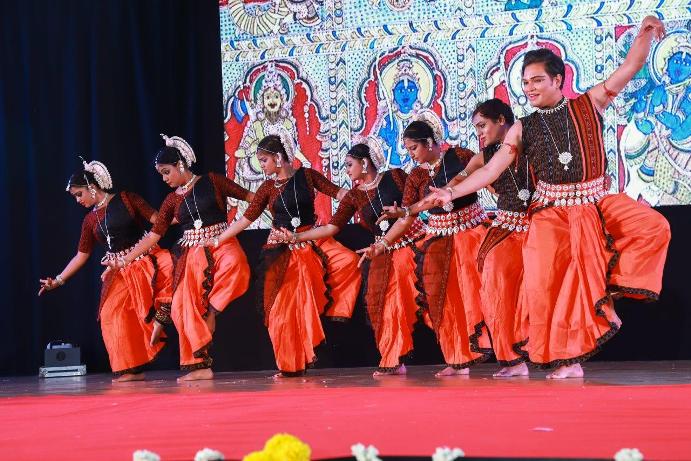 Bhubaneswar: The audience in the United Arab Emirates (UAE) were mesmerised witnessing the tremendous performance by eminent artists showcasing Odia culture during celebrations of Utkala Dibasa and 10th edition of Aekalavya in Dubai.

A record crowd of over 500 people were a part of the event organised by Odisha Samaj United Arab Emirates (OSUAE), the largest association of Non Resident Odias (NROs) in the Middle East and North Africa (MENA) Region in association with The Consulate General of India in Dubai and Odisha-based Lasyakala Foundation at Global Indian International School on April 13 in Al Barsha, Dubai.

The event started with the lighting of the lamp offering prayer to Lord Jagannath. It was followed by a performance on the iconic Odia patriotic poem written by Kanta kabi Laxmikanta Mohapatra – ‘Bande Utkala Janani’.

Attending the function the Consul General of India Vipul said that he was always very happy to be associated with Odia functions and Odia people because of the richness of its culture.

Premchand, Consul (Passport, Attestation & Community Affairs & Welfare), who attended the event appreciated the vibrancy of the Odia Community in the UAE.

A splendid display of the best that Odisha has to offer in terms of dance, music, handicrafts, fashion & food was showcased in the daylong event which had two parts. The morning session comprised of performances by the hugely talented local Odia children, men and women. They have been practicing for months and the final display was spellbinding. The highlights of the morning session were performances of Odia children to the tunes of popular Odia songs. A tribute to legendary Odia Bhajan Singer – ArabindaMuduli was also very emotional. Also captivating was a tribute to the Bollywood’s first Female Superstar Sridevi, who recently passed away in Dubai.

A souvenir brought out on this occasion was released by the Guests and other eminent personalities. The souvenir contains many interesting articles written by members of the Odia community of the UAE about Odisha and its personalities.

The guests were treated to a sumptuous spread of Odia dishes cooked by a Master Chef hailing from Odisha.
The afternoon hosted the 10th edition of “Aekalavya”, in collaboration with Lasyakala Foundation, An initiative by Saswat Joshi, Internationally acclaimed Odissi and Sambalpuri Dancer, as a tribute to the ‘Guru-Shishya’ Parampara. Shri Saswat has travelled to Dubai with a 12 member troupe of artistes.

Aekalavya started with a magical thematic presentation of ‘Dashavatar’ by Saswat Joshi, accompanied by seven of his disciples. This set the tone for the evening.

One of the major highlights of this year’s celebrations is the first ever performance of Odissi dance Legend Padmashri Ileana Citaristi (Italy born Odissi Dancer) in the Middle East and North Africa Region. She performed Odissi based on a Meera Bhajan.

Saswat gave his masterpiece performance on ‘VishwaJagannath’ composed by Padmashree Prafulla Kar. Saswat’s Odissi moves against large images of Lord Jagannath being displayed on the massive LED screen in the backdrop transformed the hall into ‘Jagannath Dham’ and the audience were visibly moved, going through a spiritual experience.

The high point of the celebratory evening was the spellbinding performance by the Guru Shishya duo of Ileana Citaristi and Saswat Joshi. They presented the 10 incarnations of the Mother Goddess – ‘Dashamahavidya’. The chemistry between the duo set the stage on fire and they received a standing ovation from the audience.

Ollywood actress Anubha Sourya also performed a solo Odissi dance. The proceedings were ably conducted by Jagruti Rath who has made a name for herself as a singer, dancer and a compere and is a well known TV personality.

“Aekalavya Samman 2018” was presented to two prominent Indian classical dance Gurus based in Dubai – Guru Nishi Singh for Kathak and Puja Unni for Bharat Natyam. Both of them performed their respective dance styles as well.