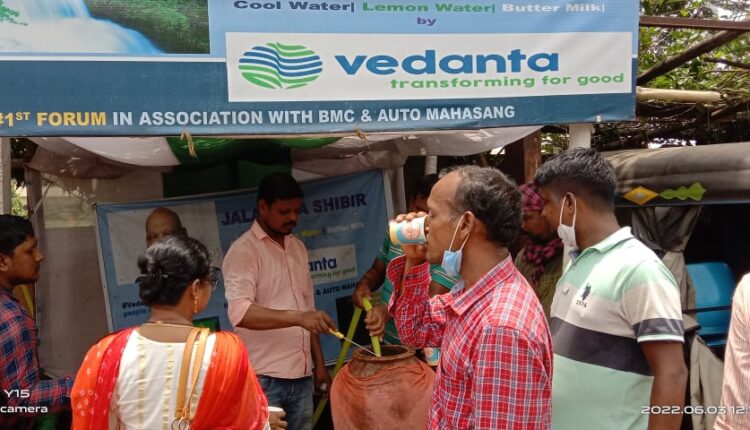 The drive, undertaken by the country’s largest aluminium producing company in association with Bhubaneswar Municipal Corporation (BMC) and  Auto Mahasang, was a big hit among the denizens here. Under the initiative, cold drinking water, lemonade and buttermilk were provided to about 10,000 commuters free of cost every day.

The community welfare initiative drew much appreciations from local residents s well as the beneficiaries.

Chandan Kar, a student who visited the camp at KIITS Square area, said many organisations had voluntarily similar drive to provide drinking water to commuters in the vicinity, but later closed them very soon. On the other hand, Vedanta Aluminium’s camps have been running for a month now and offer multiple beverages for the public to quench their thirst.

Appreciating the initiative, Bhubaneswar Mayor Sulochana Das said that this is a very good initiative, which helped the needy in this scorching heat. Arrangements were also made by the company for animals and birds.

Vedanta Aluminium CEO Rahul Sharma said, “It heartens me to see our Jal Sewa Shibir helped lakhs of Bhubaneswar’s citizens in times of need. Vedanta Aluminium’s social endeavours are aimed at improving the quality of life of the people of the state and we remain committed to their wellbeing.”

Well known industry professional and Vedanta Aluminium President (Business Development and Strategy) TK.Chand said, “Serving water to someone is a part of the hospitality tradition of our country. I am happy to see that over 2.5 lakh citizens were benefited from Vedanta Aluminium’s Jal Shibir.”