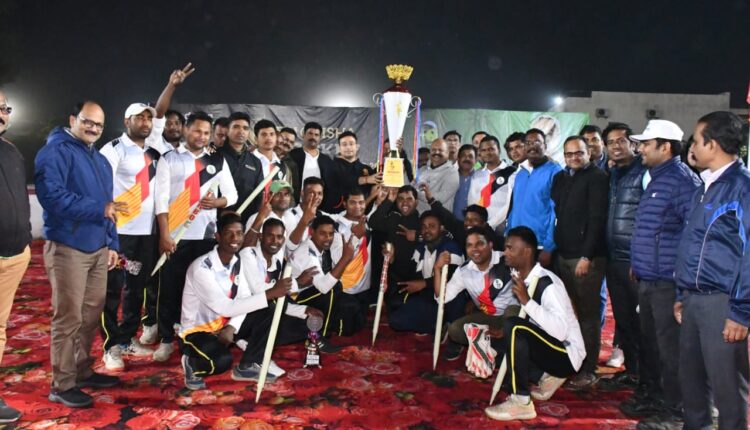 Jharsuguda: Vedanta Aluminium, India’s largest producer of aluminium, partnered with the Jharsuguda District Administration to host sports enthusiasts over friendly tournaments ahead of Men’s FIH Hockey World Cup 2023, which is being held in Odisha. With sporting fervour abuzz in the region, a two-day cricket tournament was organised by the Jharsuguda District Administration at Vedanta Meadows cricket ground on popular demand.

Speaking at the grand finale, Sunil Gupta, CEO – Vedanta Ltd., Jharsuguda said,“Sports has the power to bring people together and inspire a spirit of sportsmanship, team bonding and camaraderie. Odisha has a stellar record of giving India some of its most celebrated hockey players. We are striving to nurture a vibrant sporting culture at Jharsuguda and nearby areas to enable holistic development of the region’s youth and their love for sports. Ahead of the Men’s FIH Hockey World Cup 2023, we are delighted to support the district administration in promoting one of the biggest events in the global sporting arena. Looking forward to showcase of stellar talent and unbeatable skills!”

Felicitating the winning team, Rahul Jain, Superintendent of Police, Jharsuguda, said,“The cricket tournament was a fun and exciting experience for all, and helped raise awareness and enthusiasm for the Men’s FIH Hockey World Cup 2023 in a unique way. Vedanta Aluminium’s contribution to the promotion of sports and community spirit is greatly appreciated.”

Thanking Vedanta Aluminium for hosting the tournament, Alomani Sethi – Project Director, (R&R), said, “The cricket tournament brought together people of various fields and built a momentum for Men’s FIH Hockey World Cup, which will be a mega sporting event for the state of Odisha.”

Jeeban Mohanty, Vice President, Odisha Hockey Association, said, “Odisha has produced many hockey players of repute and this year’s Men’s FIH Hockey World Cup is a great platform to promote hockey among the up-and-coming generation. I thank Vedanta Aluminium for spreading awareness on the event in this region.”