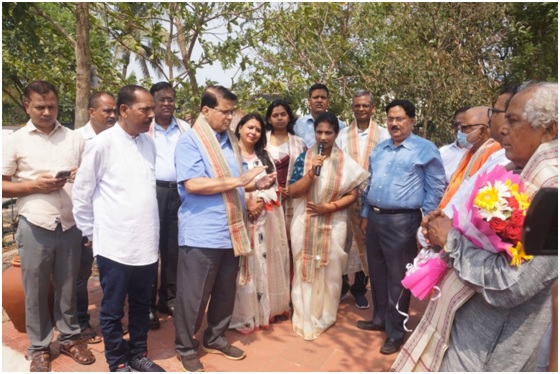 Bhubaneswar: Vedanta Aluminium launched Jala Seva Shibir at 15 strategic locations in Bhubaneswar, the Odisha’s Capital city. The purified water posts have facilities to provide safe and clean cool drinking water, lemon water and butter milk. The initiative is expected to benefit lakhs of citizens of Bhubaneswar and public at large.

Das added birds and animals are also facing troubles in hot days and care should be taken of them as well. She also advocated for planting trees to augment greenery and rainfall.

Rahul Sharma, CEO Vedanta Aluminium and Power in his message informed that Jal Seva Shivira is a need-based people beneficial program and Vedanta will be introducing more such beneficial programs at state-level shortly.

While inaugurating Jal Seva Shibira near Governor House, Actor Sabyasachi Mishra told that Vedanta is a friend in need of people of Odisha.

Padmavibhushan Sudarshan Sahoo and Padma Shri Prabhakar Maharana inaugurated Jal Seva Shibira at Vanivihar chowk and Nayapalli respectively and told that Vedanta Aluminium works for the good of the state.

Padmashree Aruna Mohanty opened the Jal Sivir at Master Canteen and thanked Vedanta for coming to the help of poor people on streets in this high temperature and heat wave.

Sriya Talkies near Gurudwara Jal Seva Shibira was inaugurated by Social Worker Arati Devi, who told that Vedanta is doing excellent CSR in Jharsuguda and Lanjigarh.

Many resident welfare associations, citizens associations and groups have praised the initiative of Vedanta at State level providing relief in scorching summer as a welcome change and noble job.

Will there be cyclone over Bay of Bengal after May 6, heavy rain in Odisha? Here’s what IMD says