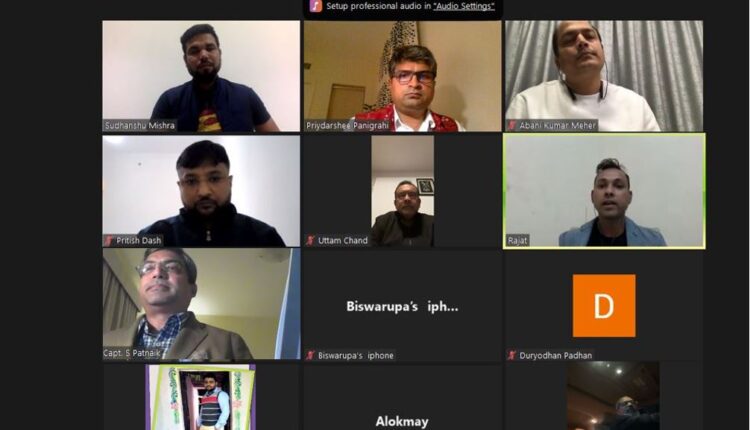 This is the third year in a row that Veer Surendra Sai’s birth anniversary has been celebrated outside India. It was celebrated for the first time by them in 2020. Due to the pandemic and the high number of Covid 19 cases, a symbolic and commemorative online function was organized on this occasion.

Senior GOOD Member and Mentor, Captain Soumya Ranjan Patnaik, who is the President of a leading Shipping Company based at Dubai, kickstarted the function with his opening remarks. He said such a commemoration is much needed to make the present generation aware of the heroism and sacrifices of Veer Surendra Sai. He also talked about GOOD working towards promotion of Odisha’s rich culture, development and tourism outside India. Odisha with its rich resources, long coastline and tourist attractions deserves more attention is what he emphasized.

Priyadarshee Panigrahi, General Manager with a leading a Consumer Goods Company, also from GOOD said ‘The pandemic prevented us from hosting a physical function however in order to main continuity, we decided to go ahead with an online commemoration. 37 years of imprisonment of Veer Surendra Sai is probably more than any other freedom fighter has undergone anywhere in the world and this story needs to told on the world stage’. Priyadarshee also requested the Central and State Governments to commission a film/documentary on Veer Surendra Sai. Currently, there is hardly any credible documentary/film available on his life.

This year’s celebrations were headlined by the Chief Guest, senior diplomat from the Consulate General of India in Dubai Shri Uttam Chand. Shri Uttam Chand is the Consul  in charge of Visa and Community Affairs. This is the first time that any Senior Indian Government Functionary has attended any commemoration of Veer Surendra Sai’s life, outside India.

Shri Uttam Chand in his address thanked the organizers for inviting him to be a part of the event. He admitted that he had not known much about Veer Surendra Sai before attending this function and said that he was personally very enlightened to know of his bravery and sacrifices. He said that it was incredible to know that Veer Surendra sacrificed almost half his life (he spent 37 years in imprisonment) in his fight against the British. He mentioned that it’s a very noble gesture on part of the organizers to organize such a function and disseminate information about Veer Surendra Sai’s bravery. He offered the Indian Consulate’s support and partnership in efforts to document Veer Surendra Sai’s life and times.

An audio-visual presentation on Veer Surendra Sai’s life and times was shown. Memorable occasions like his first rebellion (when was only 18 years old), his escape from Hazaribagh Jail and subsequent leadership of the 1857 Sepoy Mutiny in the Central Part of India were mentioned in the film.

The highlight of the evening was the special video address by PadmashriHaldhar Nag. Padhmashri Haldhari Nag in his video address expressed his happiness that National Hero Veer Surendra Sai’s Birth Anniversary was being observed in a far-off land like Dubai, year after year. He enthralled the online audience with his free-flowing poetry on Surendra Sai. His choice of pure Sambalpuri words, focus on rhyme and his lyrical and passionate delivery style mesmerized everyone.

Former Chief Justice of India, Justice Gopal Ballav Patnaik also sent a video message on this occasion. He expressed his happiness that such a function to remember Veer Surendra Sai is being organized in Dubai. He lamented that people have not been remembering our glorious past often. In this context this function is a good step according to him.

Noted Odia poet and lyricist Shri Sangram Keshari Mohanty also sent his video message. Shri Sangram is the son of late freedom fighter and Member of Odisha Legislative Assembly Harihara Mohanty. In a touching moment, Shri Sangram recited a few lines from the poem he had specially written on Surendra Sai on the occasion of his 214th Birth Anniversary.

Another unique tribute to Veer Surendra Said was paid by Smt. Mona Biswarupa Mohanty, a noted Odia artist who lives in Dubai. Mona is an acclaimed and accomplished painter who has had several exhibitions of her paintings. She sketched an ink on paper portrait of Veer Surendra Sai on this special occasion and shared it in the online commemoration function. Nimble strokes from her hand transformed a plain piece of paper into a magical portrait.

The function also paid tributes to Eminent Odia/Sambalpuri Author and Dramatist Shri Mangulu Charan Biswal. Rashtrapati and Sangeet Natak Academy Awardee Shri Biswal passed away a few days ago on the  11th of January. His popular play on Veer Surendra Sai continues to be enacted in various parts of the country and has served as an eye opener to many people. Shri Biswal had addressed the first ever Veer Surendra Sai Jayanti Celebrations outside India in 2020 in Dubai through a video message.His grandson Shri Bijon Biswal joined this online commemoration yesterday.

Other speakers Shri Pritish Dash, Shri Abani Meher and Shri Sudhanshu Mishra, all hailing from Western Odisha were categorical in demanding more recognition of Veer Surendra Sai and his bravery. Many important documents and records of his life continue to languish in the archives of the neighboring states of Chhattisgarh and Madhya Pradesh. A concerted effort to collate, restore and preserve them is needed is what they felt.

Rajat Rath, Finance Manager with a leading Telecom Company, also a founding member of GOOD offered the vote of thanks. He thanked Consul Mr. Uttam Chand and all the attendees of the online commemoration. He also promised to be back with a bigger in-person celebration next year.

Global Odias for Odisha’s Development (GOOD) is a group comprising of Expatriate Odias. Among other things, it seeks to propagate Odisha’s culture, tourism and commerce at a global level, thereby enhancing her profile on the world stage. GOOD aims to act as a ‘Brand Ambassador’ of Odisha and promote it globally. GOOD was at the forefront of an International Campaign to restore air connectivity to the newly established Veer Surendra Sai Airport at Jharsuguda.