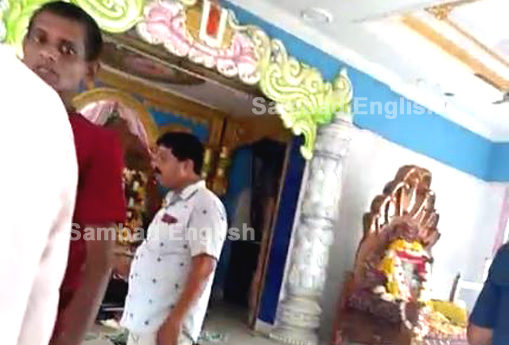 Kendrapara: A couple of days after some followers of the self-styled godman Sarathi alias Santosh Roul performing puja at Barimula Ashram under Derabisi block in Kendrapara district on the occasion of Janmashtami, a video depicting the activities went viral on social media today.

A source said that the followers had forcefully entered into the Ashram premises. They placed a photo of Sarathi on an existing Asthaan (altar) and worshipped with flower garlands, Chandan (sandalwood paste) and incense sticks. They also shouted slogans glorifying the self-styled godman.

Prasadam (fruit offering) was distributed among all the followers present and Havan (a ritual of burning cow ghee, coconut and food grains) was conducted on Nandotsav, the next day.

Despite restrictions previously imposed by a local court over performance of any puja at the Ashram and the premises remaining under possession of Enforcement Directorate (ED), at least 40 to 50 Sarathi followers had congregated on the festive days, the private source further said.

On the other hand, the incident has raised the eyebrows of many as to how the followers entered into the Ashram premises in an unauthorized manner. Many residents and intelligentsia have criticised the district and police administration for such illegal act of the Sarathi followers.

The viral video has triggered tension in Barimula panchayat and its nearby areas.

CPSE 2018 Paper I re-exam postponed due to software issues