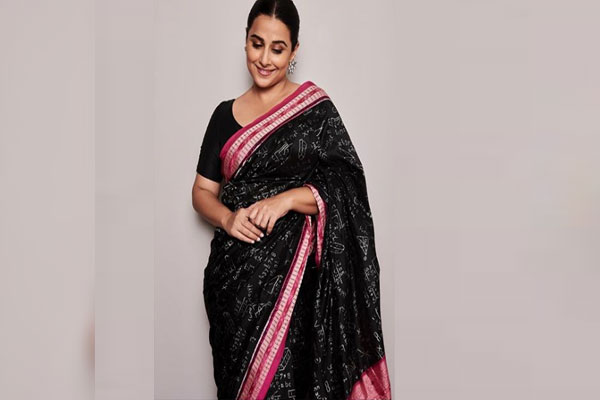 Bhubaneswar: Bollywood actress Vidya Balan’s Sambalpuri ‘Mathematical Equation’ saree that she wore for promotion of her recently-released film ‘Shakuntala Devi’ has been put up for online auction. The bidding will be closed at 10 PM on August 20.

Interested people can bid in the auction by visiting Google Forms before the above-mentioned deadline.

The received money will be presented to Bhagabata Meher, weaver of the traditional masterpiece from Odisha, informed Anita Sabat and Amrita Sabat, co-founders of Bhubaneswar-based Sabat Exports Private Limited that delivered the saree to the actress under the brand name of Utkalamrita.

Throwing light on how the ‘Mathematical Equation’ saree, a creation from Odisha’s traditional handlooms found its way to the Bollywood actress, Anita said she had met Vidya’s team in an exhibition in Mumbai where she told them about the saree. The idea delighted the actress and after seeing a sample of it, she expressed her desire to wear it a day before the release of her movie.

The delivery was made and an exhilarated Vidya later shared a velfie on social media wearing the saree and praised its weaver. Later, she returned the saree as promised but did show interest in purchasing it for good.

“After Vidya’s velfie stormed the internet, many people showed interest in purchasing it.  Seeing the demand for the saree, the co-founders decided to auction the master-piece handloom online and give the entire auction money to the weaver.

On the other hand, weaver Bhagabata Meher expressed immense gratitude towards Vidya Balan for wearing and appreciating his hand-woven exclusive piece.

Bhagwat is a Sambalpuri ikat weaver from Tikiripada village under Biramaharajpur police limits in Odisha’s Sonepur district. He has been in this profession for around 20 years. Bhagwat had weaved the ‘Mathematical Equation’ saree for the 2016 Odisha Handicrafts Award.  He had weaved three more sarees of the same design with the help of three others.  While one Prafulla Meher drew the design on a blackboard with chalk, Sonepur’s Brundaban Meher made a graph of it and later, another Ganga Meher from Kendupalli helped Bhagwat weave the delicately crafted handloom.