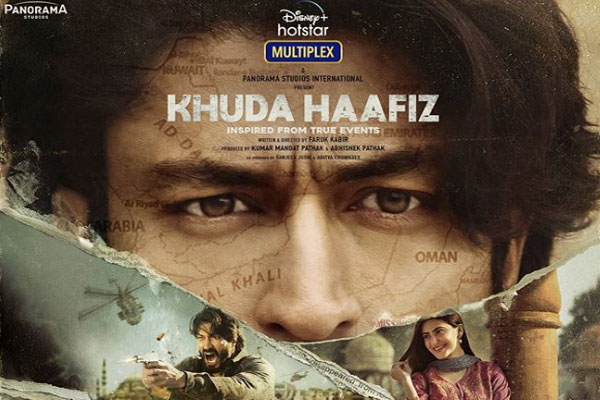 As cinema halls remain shut owing to the ongoing Covid-19 pandemic, “Khuda Haafiz” is going for a direct-to-OTT release. Vidyut is happy about the move.

The romantic action thriller is inspired by real life-events and has been directed and written by Faruk Kabir. The trailer of the film , co-starring Shivaleeka Oberoi, was released on Friday.

“‘Khuda Haafiz’ is a very special movie to me as my character Sameer is something that I have not attempted before. The movie is a perfect amalgamation of romance, action, and thriller, with an amazing cast,” Vidyut said.

“Faruk Kabir, the director-writer, is extremely talented, and it was a pleasure working with him. I’m glad that the movie will launch on a streaming platform where people from across the country will be able to enjoy it upon release,” he added.

“Khuda Haafiz” is the story of a young, recently-wedded couple from India, Sameer (Vidyut) and Nargis (Shivaleeka Oberoi), who decide to work overseas in search of better career opportunities. Under mysterious circumstances, Nargis goes missing in the foreign land and the film shows Sameer’s attempt to find his wife.”

Talking about the film, Kabir said: “‘Khuda Haafiz’, from the time I wrote it to direct it, has and will always be at heart, a love story. That’s what makes it an emotionally charged and intense thriller, too. It has real characters and a gripping real-life story. I believe it will be a unique viewing experience.”

“I am confident that the film will be well received by the audience and I am looking forward to their reaction. Faruk’s vision, the realistic action and the terrific performances by the entire cast will keep the audiences hooked till the very end,” said producer Abhishek Pathak.

“Khuda Haafiz” will release on August 14, on Disney+ Hotstar VIP.

Vidyut Jammwal: I don’t get disappointed about…