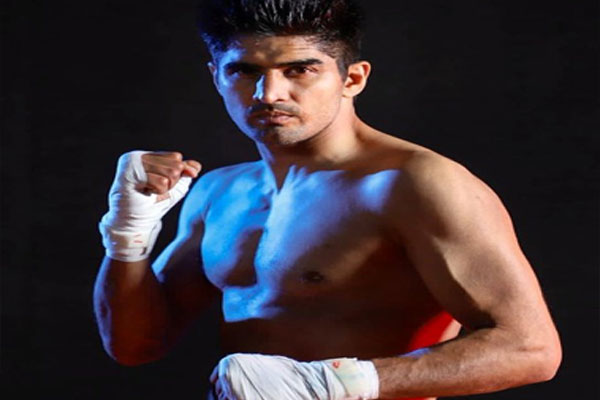 New Delhi: Olympic bronze medallist Vijender Singh is all set to return to the pro boxing ring after 19 months at the Balbir Singh Juneja Indoor Stadium in Raipur, Chhattisgarh in August 2022.

Vijender Singh’s opponent for the bout is yet to be finalised. The event named ‘Rumble In The Jungle’, is going to be only his sixth bout in India.

Vijender, 36, who is currently training in Manchester, said, “I am extremely thankful to the Chhattisgarh government, especially Hon’ble Chief Minister, Bhupesh Baghel Ji for granting their consent to hold my next professional bout. It’s a great opportunity to introduce the sport to the people of the state. Hopefully, this can inspire a new generation of boxers. I look forward to starting my unbeaten streak again.”

Vijender turned professional in 2015 and since then has a record of 12-1 with eight knockouts. His unbeaten streak of 12 unfortunately was broken in his last bout in Goa in March 2021 when he was beaten handsomely by a younger and taller Russian opponent Artysh Lopsan.

“Promoting sports for the current and next generation is extremely important for the state of Chhattisgarh. Having someone of the stature of Vijender Singh who has made the country proud at the Olympics will inspire young athletes throughout the state. The dedication that he has shown towards promoting sports aligns with us and we are excited to witness professional boxing for the first time in Raipur,” Bhupesh Baghel, Chief Minister, Chhattisgarh was quoted as saying in the release.

The event will be organised by Purple Goat Sportainment LLP.