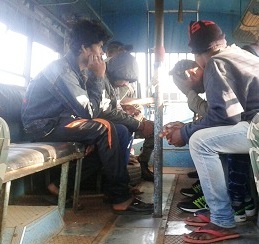 In a brave act, villagers of Chotipalanga in Odisha’s Khordha district nabbed seven looters while they were trying to commit robbery from a fish godown last night.

According to reports, as many as 9 miscreants came to the village on four bikes yesterday.

While they were inside the godown with an intention of loot, the villagers nabbed seven of the robbers and locked them inside a house.

However, two of them managed to flee the spot with two bikes.

On being informed by the villagers, Town police reached the spot with one platoon of force and arrested the miscreants.