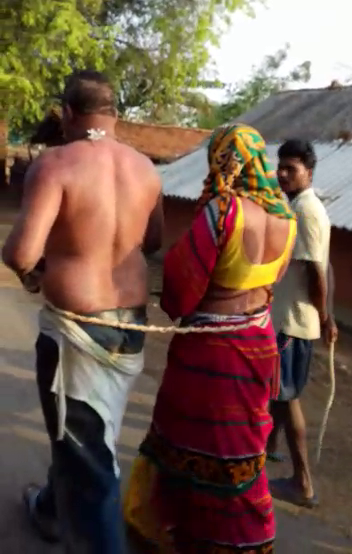 Nabarangpur: A man and woman were beaten up mercilessly by the villagers for allegedly having illicit affair here in the tribal district of Odisha.

The villagers alleged that the man from Papadahandi area works as a broker, while the woman is an anganwadi worker at Bualibeda village.

Man and sister-in-law garlanded with shoes, paraded in Odisha village over ‘illicit affair’

The villagers spotted an SUV with no occupants at Bualibeda under Jharigam block last night which raised suspicion. Later, they found the duo in a house in compromising position.

They dragged them out of the house and thrashed them mercilessly. Besides, their hair was cut and paraded on village road.

The irate villagers ransacked the vehicle and demanded to sack the woman from anganwadi.

The locals alleged that the woman was involved in running a prostitution racket. The man is said to be her partner in crime.

On being informed about the incident, Umerkote police reached the spot and rescued the suspects.

Till the filing of the report, the duo was detained at the police station for questioning.

“After we received a call from an unknown number, we rushed to the village and rescued the man and woman, who were beaten by the villagers. We are investigating the matter. Since the incident is related to a woman, the legal action will be taken after preliminary investigation,” said Umerkote IIC Birendra Senapati.

Two held in Odisha’s Nabarangpur for extorting money in…