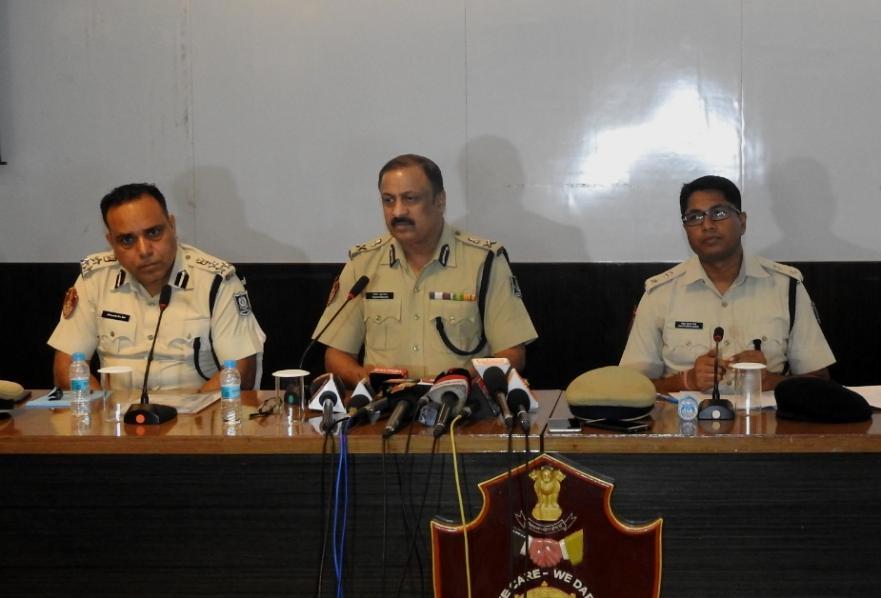 Police said that Unmay was not killed, rather he had committed suicide.

Police said that Unmay had tried to prove the incident as ‘murder’ before committing suicide at Kuakhai Riverbed. A pair of shoes reportedly belonging to a woman found from the crime spot and alta found on the deceased body were all his attempts to embrangle the police to reach the fact.

The AIIMS and forensic report said that stab wound found in the body appears to be ‘self inflicted’. The injury mark on left side of the head was not caused by anyone. There was no defence injury on body of the deceased. The analysis of cell phone data revealed that he had travelled to the crime spot alone and he was alive from 6.00 pm till 11.44 pm, said Police Commissioner YB Khurania in a press conference.

“We verified the handwritten note recovered from the spot and investigated very minutely. We finally came to know that the deceased Unmay Padhi was not married and was working with a private company. He had affairs with a lady, very junior to him, working with him at the same office. He was accused of making a sex video viral. He was arrested and was sent to judicial custody for a long time. After he came to know that he lost his job and social status due to the woman, he targeted the woman and another person with whom she had affair during the period when Unmay was lodged in jail or before that,” he said.

According to medical evidence, physical evidences, handwritten letter and mobile phone location traces, Unmay Padhi stabbed himself and later set himself on fire pouring petrol on his body, he said.

This is a case of final report mistaken fact under sections 302 and 201 of IPC, Khurania said.

Initially, the postmortem report of Unmay, whose charred body was recovered from Kuakhai Riverbed on outskirts of the city on March 21, revealed that he was stabbed with knife and burnt alive.

Police suspected that more than one person were involved in the gruesome murder case.

A probe was launched by the Commissionerate police into the murder of Unmay, who was allegedly linked to viral sex video featuring him with a woman.

During the course of investigation, police detained three persons including the woman victim belonging to Chandbali and her boyfriend indentified as Siddharth Parida for interrogation in connection with the murder.

The reports suggested that Unmay was brutally killed by the professional killers over multiple viral sex videos surfaced on WhatsApp.

However, all the reports and suspicion appeared to be false after the final autopsy report that revealed that it was a suicide case. Initially, the postmortem report by the Capital Hospital had revealed that Unmay had died of suffocation. Suspecting on the report, the police had sent it to the AIIMS where the doctors also gave the same report about his death. The state forensic report also revealed that the death was due to suffocation.

Police claimed that he was stabbed with knife, which was positioned in the 45 degree angle in his body. It suggested that he had stabbed himself and later set himself on fire pouring petrol on his body.

According to police sources, the woman’s mobile phone was traced from Chandbali and her boyfriend’s number was located in Khandagiri area during alleged murder of Unmay at Kuakhai Riverbed. And no other number was found near Unmay’s mobile number. He had last visited Naharkanta alone after BJB Nagar and Bapuji Nagar in Bhubaneswar.

Police found a handwritten letter from Unmay’s jacket recovered from the spot. It revealed that the woman featured in the sex video and her boyfriend had been torturing and exploiting him physically and mentally and the duo was blackmailing him.

Notably, the obscene video had gone viral on social media a year ago in which Unmay and a girl from Chandbali area of Bhadrak district were seen together. On complaints of the girl, Unmay was arrested by Kharavela Nagar police.

Unmay was working with a private educational institute here where the girl was also working. Later on, the duo developed physical relationship.

The charred body of Unmay was recovered from Kuakhai Riverbed on outskirts of Bhubaneswar on March 21.