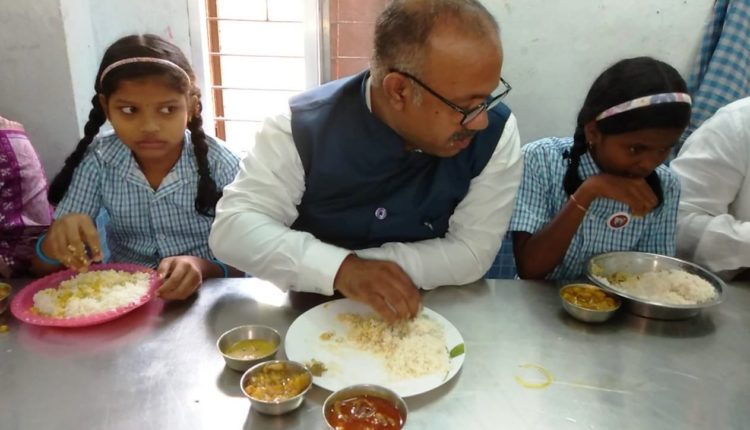 Rayagada: Even after a Block Education Officer (BEO) in Sundergarh district was suspended for having a ‘lavish’ lunch at a school during an inspection as part of the Government’s 5T initiative, ministers and officials seem to have not learnt any lesson on those lines.

In a fresh similar incident, Culture and Tourism Minister Jyoti Prakash Panigrahi, who visited Eklavya Model Residential School at Siriguda in Rayagada district yesterday, was served a chicken Thali (platter) in the lunch.

Reportedly, the minister visited the model school for an inspection to check quality of food being served during mid-day meal yesterday after CM Naveen Patnaik directed ministers and senior officers to visit districts and have lunch in schools, orphanages, hospitals and Aahaar centres in a bid to get direct feedback on functioning of the institutions at grassroots.

After a warm welcome by school authorities, Panigrahi sat with the students to have lunch. Besides the Minister, former Koraput BJD MP Jhina Hikaka was also seen having food. Interestingly, some students were seen having chicken curry and some having vegetarian meal. It is said that the girl students did not have non vegetarian meal due to Kartika month.

The incident came to fore after a picture of the minister having lunch with the schoolchildren went viral on social media and drew flak from several quarters. Meanwhile, the preferential treatment to the minister has raised questions on effective implementation of the Government’s much-hyped 5T initiative.

Now, the question arises as to why chicken curry was included in the mid-day meal where only provision of serving egg on some days is sanctioned by the government.

On October 11, BEO Binay Prakash Soy was suspended by Sundargarh Collector after a video of him having chicken with school children, who were served only rice and dal, went viral on social media.