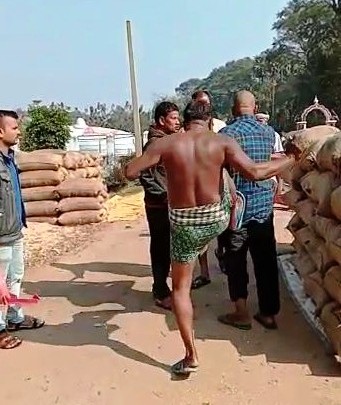 Dhenkanal: A farmer was reportedly thrashed and kicked at a paddy mandi in Kamakhyanagar area of Odisha’s Dhenkanal district, a video of which has gone viral on social media.

According to reports, victim Gautam Sahu of Koriapala had on February 11 gone to the mandi of Jagannathpur Co-operative Society to complain about token issues. In the meantime, Ashok Nayak, former president of the cooperative society, and his son hurled abuses at the farmer.

The matter turned ugly as the father-son duo thrashed Sahu and kicked him. The incident was recorded on a mobile phone camera while the clip has surfaced on social media platforms.