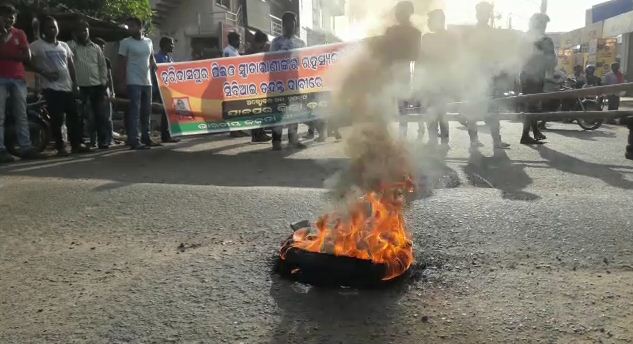 While shops and business establishments remained closed, vehicular movement came to a grinding halt in Jajpur town as BJP workers staged road blockade at various junctions by burning tyres. Policemen have been deployed across the town to avoid any untoward incident.

“We strongly suspect that the mysterious death of the VLW is a case of rape and murder. We want the case to be handed over to the CBI,” said BJP leader and former DGP Prakash Mishra.

Mishra, who was a part of the BJP team that visited Haridaspur for an inquiry of the incident, alleged that probe was not going in right direction as cops were working under the instruction of the suspects.

Notably, Smitarani had gone to Haridaspur panchayat to disburse old age pension among the beneficiaries on October 16. Later, she went to a guest house of Rupesh Bhadra, husband of Haridaspur Sarpanch Madhusmita Bhadra, in Baligari area in his car. She was then found dead in Rupesh’s personal room in the guest house. Police have arrested Rupesh on charges of abetting Smitarani’s suicide.

Properties worth lakhs gutted in fire mishap at warehouse in Rourkela