Vote for BJP to see transformation in Odisha: Modi 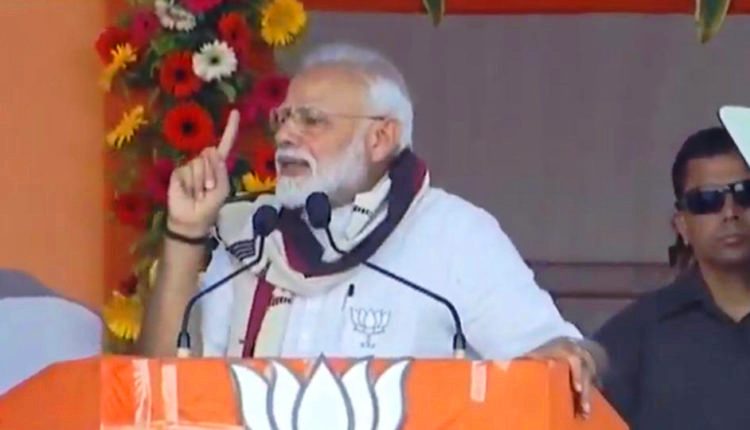 Before targeting the ruling BJD, Modi thanked the people of the nation and the Odisha for their continuous support to him during his last five years of leadership.

Highlighting his various achievements during the last five years, Modi said, “My govt has been able to provide pucca houses to eight lakh families, gas connections to 40 lakh houses under Ujjwala Yojana and electricity to 24 lakh houses in 3,000 villages in Odisha; all these have been achieved only because of your continuous support and encouragement.”

Terming the ruling BJD as corrupt Government, Modi questioned the people as to can a Government which is embroiled in chit fund scams, giving patronage to mining Mafias and unable to punish criminals, develop and give protection to the people of Odisha?

“Both Congress and BJD have betrayed the people of Odisha. Now it’s the time to punish them and bring a change in the leadership. This is the time to bring a double-engine Government of BJP to ensure building of a ‘new Odisha’. Then only Odisha can develop,” he added.

“When the Indian Army entered their home and killed terrorists in Pakistan, some parties are seeking proof of the same,” he stated.

The PM further criticised the BJD Government alleging that the latter is depriving the farmers of Odisha from availing benefits under the PM-KISAN scheme. He also slammed the Odisha Government for rejecting the Centre’s flagship Ayushman Bharat health insurance scheme.

Modi called upon the people of Odisha to vote for BJP and give the party a chance to do ‘Chowkidari’ in Odisha as well.