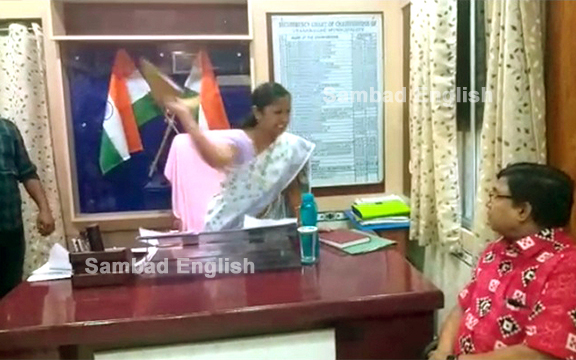 Vyasanagar: In a bizarre incident, the chairperson of Vyasanagar municipality in Jajpur district Sangeeta Pingua recently threw a file at executive officer. However, a video of the inappropriate act went viral on social media today.

A source said that the elected representative and the official were previously not on good terms with each other. Many locals have resented the inappropriate behavior of the people’s representative.

The lady chairperson got irked over a wrong policy decision of the official. She earlier objected to several issues relating to biometric attendance, mobile tower construction, billing and annual planning. She is said to have mentally tortured the official by posting adverse remarks on different social media. Even to the extent, Rout was being threatened to be publicly beaten by the chairperson.

When contacted, the chairperson Sangeeta said, “After scrutinising a file relating to the construction of mobile towers under Vyasanagar civic limits, I returned it to the executive officer Rout.”