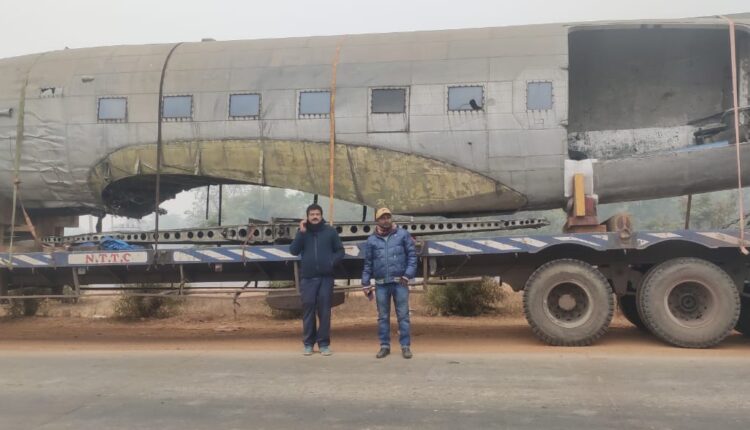 The dismantled aircraft carried on three lorries crossed the Laxmannath Toll Plaza in Jaleswar of Balasore district, this morning. The process for transporting the aircraft commenced from yesterday.

A 10-member team of Aerospace Research Development took 12 days to dismantle the aircraft and pack its equipment.

In order to avoid traffic jam during its transportation to the Biju Patnaik International Airport in Bhubaneswar, a special patrolling van has been engaged to escort it.

Special arrangements have been made by the district police of Balasore, Bhadrak, Jajpur and Twin City Commissionerate Police in this regard.

The Dakota was earlier lying decrepit at the Kolkata Airport. After reaching the Bhubaneswar Airport, the aircraft will be reassembled and renovated.

Notably, the Airport Authority of India (AAI) had allotted 1.1 acre of land for the aircraft to be placed in front of the airport named after the legendary leader for display of the DC-3 aircraft. A memorial will be built for this purpose.

Biju Patnaik, a skilled pilot, had used a Dakota aircraft to rescue erstwhile Indonesian Vice President Muhammad Hatta and Prime Minister Sutan Sjahrir in 1947. For his daredevilry, the  Indonesian government had twice decorated Biju Patnaik with Bhumiputra – the highest civilian award of the country.

Patnaik, before joining politics, had floated Kalinga Airlines which had a fleet of 15 Dakotas. The company had its headquarter in Kolkata. The airlines used to offer services to the Army for transporting jawans and airdropping supplies.