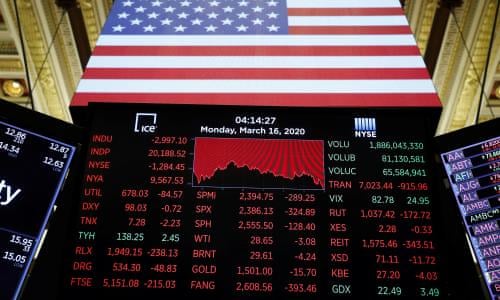 New York: US stocks ended significantly lower amid the fast-growing spread of coronavirus in the country.

10 of the 11 primary S&P 500 sectors traded lower, with energy down 6.93 per cent, becoming the worst-performing group. Utilities climbed 0.53 per cent, the only gainer among the sectors.

The United States became the country with the most COVID-19 cases worldwide on Thursday afternoon US Eastern Time, according to Johns Hopkins University.

As of 2 p.m. Eastern Time on Friday (1800 GMT), there were 94,238 confirmed cases in the United States, with 1,438 deaths, data from the university’s Center for Systems Science and Engineering showed.

A shocking number of Americans applied for jobless benefits last week due to the coronavirus outbreak.

US initial jobless claims, a rough way to measure layoffs, were registered at 3,283,000 in the week ending March 21, an increase of 3,001,000 from the previous week’s revised level, the Department of Labor reported Thursday. The reading easily crushed the previous record rise of 695,000 in October 1982.

Following a Senate approval earlier this week, the US House of Representatives on Friday passed a US $2 trillion COVID-19 stimulus package by voice vote, sending it to President Donald Trump for signature.

The bill, aimed at cushioning the economy from COVID-19 ravages, will provide small businesses emergency loans, business tax breaks, expanded unemployment benefits, more than US $1,000 direct payments for working Americans, government aid for industries such as airlines and hotels, as well as more support for hospitals and state and local governments.