‘Want to protect life, livelihood, but not like this’: SC on plea against Shaheen Bagh demolition 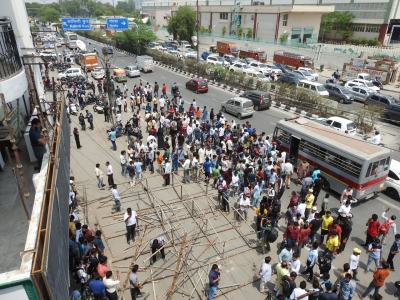 New Delhi: The Supreme Court on Monday refused to entertain a plea challenging the demolition drive in Shaheen Bagh by the South Delhi Municipal Corporation.

“We need to balance interests… but not when encroachments are being removed. Go to the high court,” it said.

Solicitor General Tushar Mehta submitted that some kind of misrepresentation is being made and it is a routine demolition drive carried out against encroachments.

As Surendranath insisted that the top court should hear the matter, the bench replied that the petitioner should move the high court, remarking: “This is too much…”.

The bench noted that the municipal corporation is not carrying out the demolition drive against encroachments for the first time.

“We want to protect life, livelihood, but not like this,” it said.

Mehta pointed out that in 2020 and 2021, the Delhi High Court passed directions to remove encroachments on public roads.

At the outset, the bench queried: “Why is CPI-M filing a petition… if some aggrieved had come, we could have understood.”

As Justice Gavai said what is the fundamental right violation under Article 32, Surendranath replied that it is in the public interest and not the party interest.

Justice Rao said: “Do not make this court a platform and come on behalf of a political party.”

Surendranath, however, maintained that no notice or breathing time was given before initiating the demolition drive and added they are demolishing buildings.

At this the bench replied: “We entertained Jahangirpuri since structures were brought down..”

Surendranath asked why they are using bulldozers to remove encroachments, and added that the petitioner is a hawkers’ union. However, Justice Rao said hawkers are not in any building.

“We will not entertain this,” said the bench. The petitioner agreed to withdraw the petition.

“It is most respectfully submitted that the political executive of Respondent No. 1 Municipal Corporation (SDMC) is maliciously indulging in a political game plan. The entire action of the Respondent is absolutely and manifestly arbitrary and without following any due process of law,” said the plea filed by Delhi Pradesh Rehri Patri Khomcha Hawkers Union through its General Secretary.

The plea contended that without giving a proper show cause notice and giving breathing time to people residing/working in different areas of south Delhi, the respondents proposed to start demolition of buildings denying their precious constitutional rights and right to life.

Families of bride, groom pelt stones at each other over ‘sherwani’