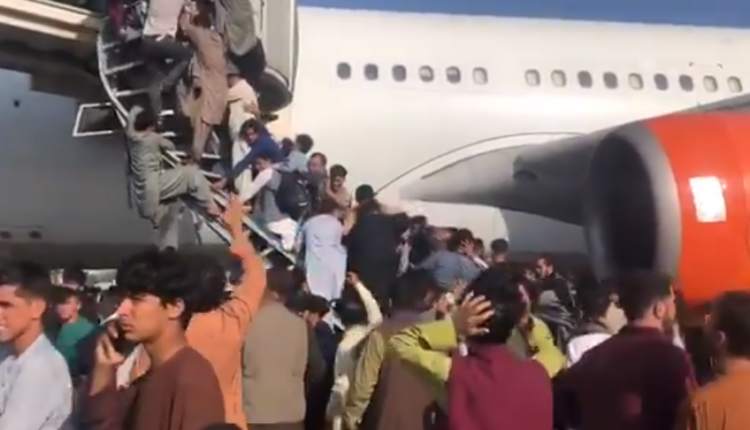 Kabul: An apocalyptic scene was filmed at the Hamid Karzai airport in Kabul, Afghanistan, as the country fell to the Taliban.

A video on Monday showed crowds scaling a jet bridge at the airport, trying to push their way onto a plane parked on the tarmac, Business Insider reported.

“This is, perhaps, one of the saddest images I’ve seen from Afghanistan,” Careem wrote. “A people who are desperate and abandoned. No aid agencies, no UN, no government. Nothing.”

This is, perhaps, one of the saddest images I've seen from #Afghanistan. A people who are desperate and abandoned. No aid agencies, no UN, no government. Nothing. pic.twitter.com/LCeDEOR3lR

The plane the crowds are seen forcing their way onto is a Kam Air jet. Kam Air is a private Afghan airline that flies domestically as well as to destinations elsewhere in the Middle East and Asia.

Insane. Don’t have any other words.

As of Monday morning, all commercial flights out of Kabul were cancelled, the Afghanistan Civil Authority said, according to CNN.

Scenes of chaos unfolded at the airport as Afghans tried to flee the country on Sunday as the Taliban finalized their takeover.