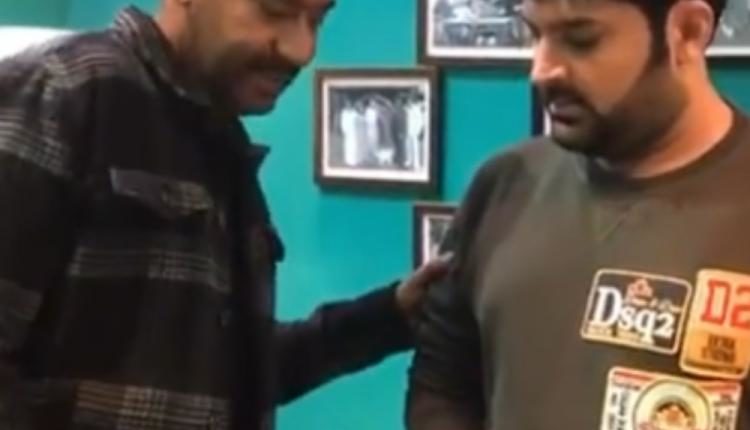 Bhubaneswar: Bollywood celebrities make it a point to drop on the sets of The Kapil Sharma Show to promote their movies.

Recently Ajay Devgn dropped in the sets of The Kapil Sharma show to promote his upcoming movie “Tanhaji: The Unsung Warrior”, when the idea of making a video struck the two.

Kapil Sharma took social media to share a media where the comedian requests his viewers to watch Ajay Devgn’s upcoming period piece “Tanhaji” which is about to release in January in Punjabi. Just when Ajay enters and tells the camera person to stop recording” Zara Bandh Karna” but the camera continues rolling and captures the moment when when Ajay Devgan bribes Kapil Sharma with money for hilariously promoting the movie. Kapil claims that the deal was set for Rs 1200, Ajay unable to find out cash from his pocket, walks out. Kapil Sharma took his social media Instagram with the caption,”Corruption is everywhere” and  and confirmed it with good humour to all its fans and have added hashtags comedy,fun,laughter in the end.

Ajay Devgn’s upcoming movie “Tanhaji: The Unsung Warrior” directed by Om Raut will release in 3D and to hit screens on January 10 2020, the film is based on the life of Tanaji Malusare, while Ajay plays the titular role and Saif Ali Khan plays the role of antagonist and Kajol potrays the role of Tanaji’s wife Savitribai Malusare.