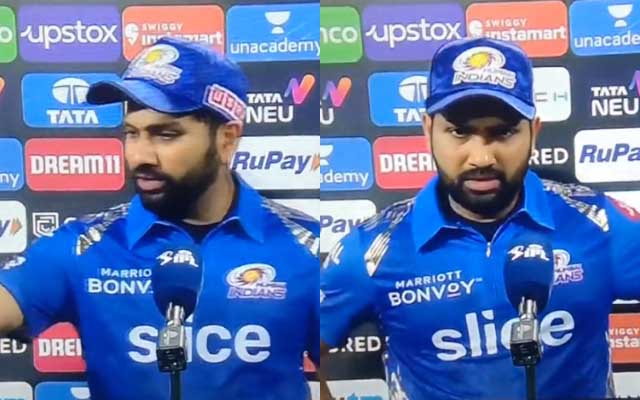 Mumbai: After losing the match against Kolkata Knight Riders on Wednesday, Mumbai Indians captain Rohit Sharma has lamented his teammates for ordinary display in the batting and bowling departments.

Rohit, visibly frustrated after the loss, could not hear a question from commentator Danny Morrison before telling the production personnel to increase the volume.

“We didn’t bat properly till the second half of the innings. Then, in the last few overs, the batters went after the bowlers and posted a reasonably good total in the end. Even in the bowling department, we lost the way after the 15th over. The bowlers conceded a lot of runs in the end,” Sharma said after the match.

MI fell to a third-consecutive loss in the IPL 2022 after a five-wicket defeat to KKR. Venkatesh Iyer’s half-century and Pat Cummins’ 14-ball fifty took KKR past the line and skipper Rohit Sharma gave credit where it was due.

“Never expected him (Pat Cummins) to come and play like that so credit to him. The pitch got better and better to bat as the game went on. It was holding up initially,” Sharma said.

However, the Mumbai Indians captain praised the batters for getting 76 runs in the last five overs – courtesy Suryakumar Yadav’s fifty, Tilak Varma’s useful 38 not out and Kieron Pollard’s 22 off five balls – on a tough pitch.

“Overall it was a good pitch. With the bat we did not start well, in the last 4-5 overs to get more than 70 runs was a great effort from the batting unit,” he said.

However, he did admit it was a tough loss to take, considering MI’s position in the match.

“We did not bowl according to the plan. We had the game till the 15th over, but then Cummins was brilliant. Whenever you have runs on the board, we always have the upper hand. We had them 5-down, it was just a matter of the wicket of Venky or Pat, they also had Sunil (Narine) who could smash them. This will be hard to digest, the way it turned out in the last few overs. We have a lot of hard work ahead of us,” he stated.

Head coach Mahela Jayawardene addressed the post-match press conference and talked about how MI planned well to get the maximum out of the last few overs in the batting innings.
“We knew that KKR had a strategy of bowling their spinners at the back end too and Surya was key to taking them on. The wicket was tough initially, there was some steep bounce. We were a bit behind but we got to a par score with those big overs at the end and were in the game,” Jayawardene said.

There have been three defeats on the trot now and Mahela wanted the team to get that elusive first win soon.

“It’s always tough with a start like this. We had a chance in all three games but were not able to close it off which is a concern. It’s a long tournament but we need to make sure we get a win and get into some good habits. Anything can happen, especially with 10 teams and make sure we are in it midway through the season,” he told to MI’s official website.

“The young guys like Tilak have been fantastic, Brevis in his first game did well. We just need to work with them and think about the combinations we have to play,” the coach concluded.