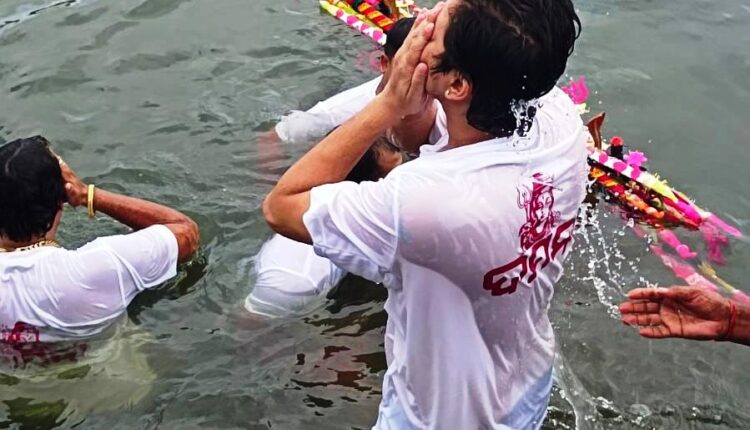 Bhubaneswar: Ollywood actor Babushaan Mohanty, who will be seen in his next ‘Daman’, performed Bol Bam Jatra here on the first Monday of Sravan month today.

The actor along with entire team of the upcoming movie and his fans visited Bindusagar lake in Old Town area to take a Holy dip. Later, he walked barefoot carrying pitchers containing sacred water from the waterbody to perform Puja at Lord Lingaraj temple.

In ‘Daman’, Babushaan will portray the role of a doctor working in Maoist-hit Malkangiri district.

“The movie is based on a true story. The subject touched my heart. The first thing about this project, which attracted me, is that it is about helping others. I could connect myself with the emotions involved in the story. I feel, the movie will bring in a revolution in the Ollywood industry. I am seeking everyone’s blessings and hope my audience will accept me in this new avatar,” said the actor.

The movie is slated to release on September 30 this year. Produced by Deependra Samal under the banner J P Motion Pictures, ‘Daman’ is a deviation from the usual rom-coms of Ollywood and will be sent to various film festivals. Recently, the actor visited MLA Pranab Prakash Das along with the team to show him the trailer.

Sources said Babushaan and the team will promote the movie across the country for Prabasi ( non-resident) Odias starting with Chennai on July 24. A special screening of the trailer will be held for members of Utkal Association of Madras.

12 killed as bus plunges into Narmada river in Madhya Pradesh