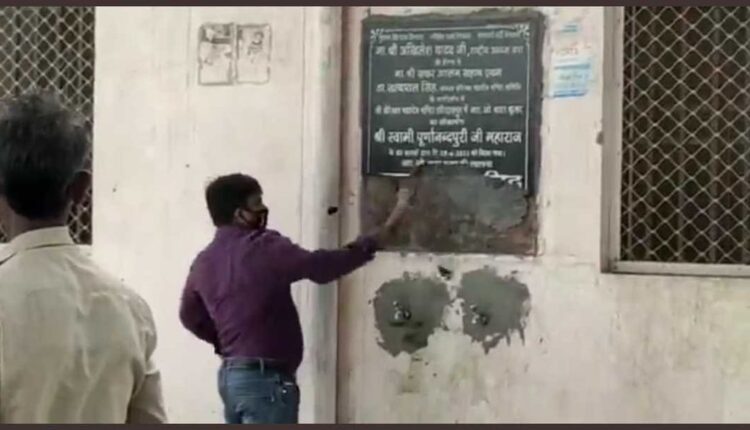 Aligarh (Uttar Pradesh): A Bajrang Dal leader was arrested and later released for barging into a temple in Aligarh and allegedly destroying the foundation stone of a water cooler that was donated by a Muslim.

Deepak Rajput, was released on bail on Thursday evening amid protests by the right-wing outfit.

Several Bajrang Dal members had reached the Lodha police station where Rajput was being held and protested.

#BajrangDal activist breaks the foundation stone of a water cooler donated by #Samajwadiparty (youth wing) leader Salman Shahid to a temple in #Aligarh, as it had his name on it. @aligarhpolice @Uppolice pic.twitter.com/G0vqpRp0D4

Lodha police station in-charge Gajraj Singh said that Rajput was arrested under section 151 of CrPC (arrest to prevent the commission of cognizable offences) and released on bail.

Bajrang Dal convenor (city) Gaurav Sharma told reporters, “There was no need of a foundation stone bearing the name of Muslim leader inside the temple. This was a conspiracy.”

The temple committee had filed a police complaint saying that some ‘anti-social elements’ entered the Khereshwar Mahadev temple and destroyed the foundation stone of the water cooler that had been donated by Samajwadi Party leader Salman Shahid.

The temple committee head, Satyapal Singh, had demanded a probe into the matter.

Meanwhile, BJP MP Satish Gautam said that having a Muslim leader’s name inside the temple was an attempt to “hurt the sentiments of the Hindu community” and was being done with an eye on elections, next year.

“How would they feel if my name is mentioned in a similar way inside a mosque?” he asked.

The SP leader had donated the water cooler to Khereshwar Mahadev temple in Aligarh’s Lodha area on June 28 after discussing it with the temple committee.

Satyapal Singh said, “We did not find any problem in installing the foundation stone inside the temple with his name. Unfortunately, after this incident, we had to apologize to him and return the water cooler to maintain a peaceful atmosphere in the town.”