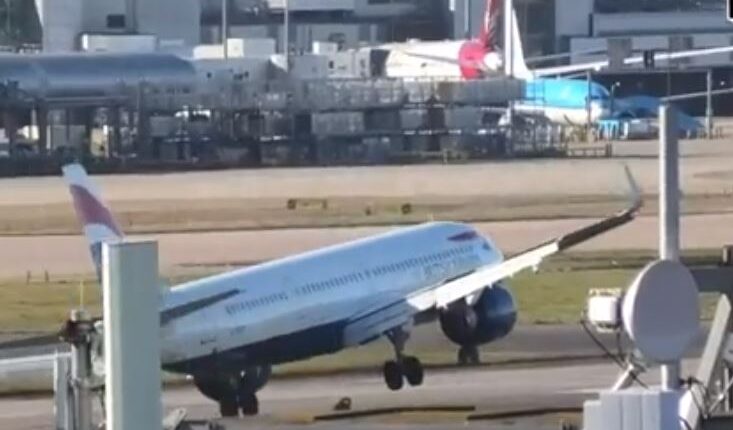 According to a report on Sky News, the British Airways jet arrived from Aberdeen, Scotland at around 10:50 am on Monday but strong winds caused by Storm Corrie forced the pilot to abandon the scheduled landing.

The plane’s wheels touched down briefly before forcing the pilot to fly back into the air.

A321 TOGA and Tail Strike!
A full-on Touch and go, with a tail strike! Watch for the paint dust after contact and watch the empennage shaking as it drags. The pilot deserves a medal! BA training could use this in a scenario – happy to send the footage chaps 😉#aviation #AvGeek pic.twitter.com/ibXjmVJGiT

Video footage viral on the internet shows the plane making a turbulent ascent before its right wing lifts into the air, forcing the plane to careen down the runway. The pilot, after initially aborting the landing, successfully landed the plane in his second attempt.

“Our pilots are highly trained to manage a range of scenarios, including extreme weather conditions, and our flight crew landed the aircraft safely. Our customers and crew all disembarked as normal,” British Airways said in a statement

According to Britain’s Met Office, Storm Corrie lashed several parts of northern Europe on Monday, with winds speeds reaching as high as 145 km per hour in some areas.

World Cancer Day 2022: History, significance, theme and all you need to know