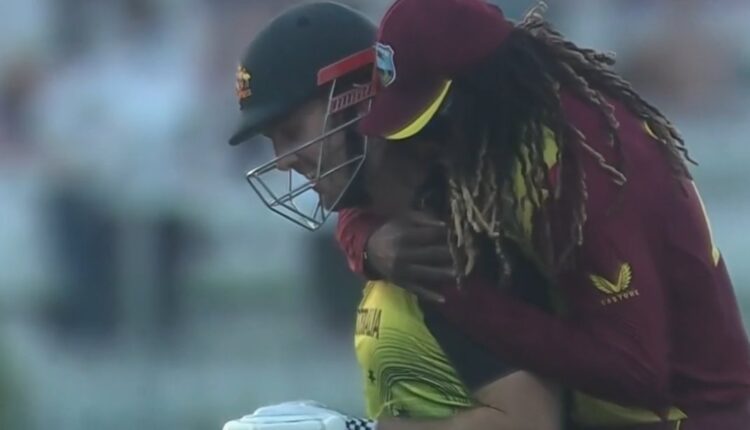 Abu Dhabi/Bhubaneswar: David Warner struck an unbeaten 89 off 56 balls to help Australia cruise to an eight-wicket win over West Indies in their final Super 12 match of the ICC Men’s T20 World Cup at the Sheikh Zayed Stadium here on Saturday.

However, Chris Gayle, reportedly playing his last game for the West Indies, stole the show with a beautiful moment after taking the wicket of Mitchell Marsh.

Warner’s knock, laced with nine fours and four sixes, along with Marsh’s 53 off 32 balls, was instrumental in Australia chasing down 158 with 22 balls remaining, giving a big boost to their net run rate in Group 1 standings.

After dismissing Marsh, Gayle ran towards him and hug him from behind. The ‘Universal Boss’ reportedly thanked Marsh for giving him his last wicket in an international match for the West Indies.

Warner and Aaron Finch (9) gave Australia a flying start with 33 runs in the first three overs. Left-arm spinner Akeal Hosein gave West Indies their first breakthrough, with Finch inside-edging to his stumps in the fourth over. Warner continued his good show, welcoming Dwayne Bravo with a loft over mid-off. He then went on to hit Hosein for two boundaries in the final over of power-play.

Post power-play, Marsh joined the party, smacking Hayden Walsh Jr and Hosein for a boundary each. Walsh Jr was taken for six more by Warner, who sprinted for a brace on the next ball to reach his 20th half-century in T20Is. Marsh treated Andre Russell with disdain, slamming him for a hat-trick of boundaries in the tenth over.

From there, it was just one-way traffic as Warner and Marsh continued to find boundaries. After striking Jason Holder for successive boundaries in the 14th over, Marsh reached his half-century with a single to long-on, also bringing the century of the partnership between him and Warner.

Warner took 11 runs off Bravo’s last three balls in T20Is, including a four and six to help Australia inch closer to the target. Chris Gayle broke the 124-run partnership as Marsh drove straight to mid-off. Warner finished off the chase with a flick wide of slip on the bowling of Roston Chase.

Earlier, Josh Hazlewood (4/34) was the pick of the bowlers in Australia restricting West Indies to 157/7 in 20 overs. The start wasn’t ideal for him, though. Evin Lewis smashed him for a hat-trick of boundaries in the second over, followed by Gayle pulling him for a big six over deep mid-wicket. Gayle went on to welcome Pat Cummins with a pulled six over long-on. But on the next ball, Gayle chopped onto his stumps.

Hazlewood, returning after being hit for 20 runs in his opening over, made double strikes in the fourth over. Nicholas Pooran sliced straight to cover-point on a short ball while Chase was clean bowled in an attempted drive.

Lewis shared a stand of 35 with Shimron Hetmyer for the fourth wicket to stabilize the West Indies innings. But the partnership was broken in the tenth over as Adam Zampa forced Lewis to loft a googly, which was caught by forward-diving long-on. Three overs later, Hetmyer gloved behind to the keeper, giving Hazlewood his third wicket of the day.

Bravo, playing his last international match, began with a six off Starc. In the next over, Pollard began his onslaught, smashing Cummins for a four and six. Though Hazlewood took out Bravo in his final over, Pollard equalized by smashing two boundaries. But he fell in the final over, holing out to long-on off Starc in an attempt to go big. Russell’s successive sixes on the last two balls of the innings ensured West Indies crossed the 150-mark. But it wasn’t enough, in the end, to sign off from the tournament with a win.